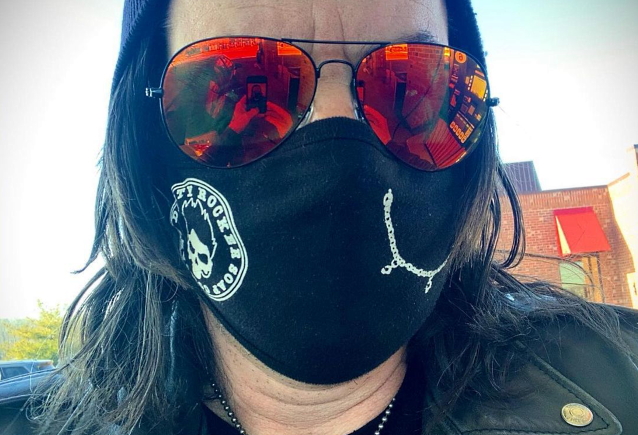 SKID ROW's RACHEL BOLAN: Why I Really Like Wearing A Mask

SKID ROW bassist Rachel Bolan has spoken out in favor of mask wearing during the pandemic, saying it can protect both the wearer and those around them from COVID-19.

On Saturday (February 6),Bolan posted an Instagram photo of him wearing a mask from his Dirty Rocker Soap Company, and he included the following message: "I really like wearing a mask. For a lot of reasons. The most important reason is obviously to help myself and others from the spread of germs and virus. Whether we want to admit it or not. Wearing the right mask helps. But there are more that make wearing a mask something I really enjoy.

1. Facial hair. I'm saving a ton on razors and Just For Men - beard and mustache color.

2. A mask is another accessory to project your style. It's just as effective as a badass leather jacket or a cool t-shirt. Style is essential.

3. As a kid that always had his face in a comic book and faithfully watched Batman, Superman and The Green Hornet on TV, wearing a mask gives me an alter ego or secret identity super heroes had. I get the same feeling putting on a mask that I used to get tying a small blanket to my neck pretending it was a cape. It's fun to me.

"I will probably wear a mask long after I receive the vaccine and further into the future. That being said, just remember if you happen to see me wearing a mask there's a strong possibility I haven't brushed my teeth.

While 450,000 Americans have died so far as a result of COVID-19, a number of people have come out against COVID-19 response measures, including lockdowns, physical distancing and mandatory mask policies, saying that they violate constitutional rights.

SKID ROW is currently working on the final chapter of the band's "United World Rebellion" trilogy. The disc was tracked in part at a Nashville, Tennessee studio with producer Michael Wagener, who also helmed the group's 1989 self-titled debut and 1991's "Slave To The Grind".