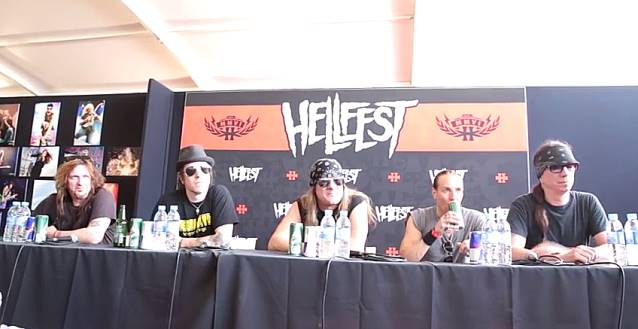 SKID ROW's SABO Declines Comment On SEBASTIAN BACH: 'It Doesn't Have Any Relevance In Our Lives'

SKID ROW took part in a press conference after the band's June 21 performance at Hellfest in Clisson, France. You can watch video footage of the question-and-answer session below. A couple of excerpts follow (transcribed by BLABBERMOUTH.NET).

On whether there are any plans for SKID ROW to release a concert DVD:

Dave "Snake" Sabo (guitar): "Yeah, actually, we're doing the Polish Woodstock [festival] on July 31, so we're gonna record that for a DVD to be released. We've never done anything like that before, so it's exciting for us. It's gonna be the largest crowd that we've ever played in front of; it's about 500,000 people, which is fucking insane. So we figured, why not document it?"

On what they think of former SKID ROW singer Sebastian Bach's recent observation that the majority of his Facebook fans did not purchase a copy of his new solo album, "Give 'Em Hell":

Sabo: "In all honesty, we're only concerned about SKID ROW and, honestly, I don't know what goes on in his life or [former SKID ROW drummer] Rob's [Affuso] life. This is the most important thing to me and to all of us. I'm more concerned about SKID ROW today and tomorrow. Our main concern was the show today; we had a great time and the crowd was amazing. And then we'll release the next EP in August, the first week of August, and that's our concern. In all honesty, it's so old and so done that it doesn't have any relevance in our lives. And that's the truth."