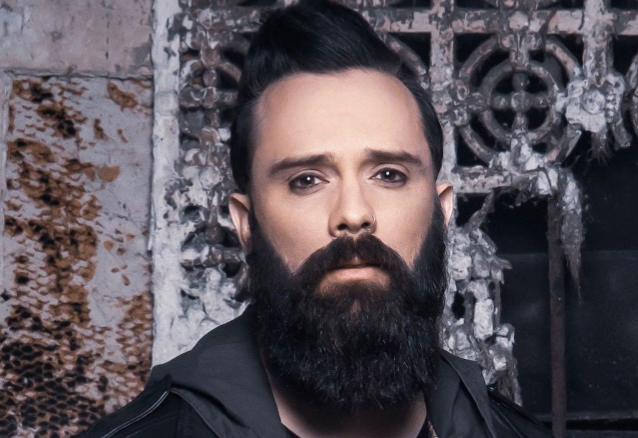 John Cooper, the frontman and bassist for the Grammy-nominated Christian rock group SKILLET, recently spoke to the "Idleman Unplugged" about the criticism he and his bandmates have faced for playing "hard music", which is often viewed by some people as demonic or anti-religious. He said (as transcribed by BLABBERMOUTH.NET): "I just love loud music. I've always loved it since I was a kid. I just related to it. It probably was playing sports. There's something about the energy of playing a competitive basketball game or running track or wrestling or getting ready for that football game — whatever it was, there was something about that energy.

"I really don't want to use scripture cavalierly, but I will throw some scriptures out there that I think they mean something to me, and maybe it's applicable, maybe it's not," he continued. "But I think about this scripture that says, 'To the pure, all things are pure.' And one of the things that that scripture, as I've understood it to mean, is that sometimes there's going to be something, it may be attached to something that's really negative for someone, but maybe it's not negative for someone else. Maybe that could be that meat that was sacrificed to idols, as we see in the scriptures, and somebody's, like, 'Hey, that's not me anymore. I gave my life to Jesus. I don't want nothing to do with that meat.' Then you may have somebody else that's a Christian that's, like, 'I didn't even know this was sacrificed to idols. I just thought it was meat, and I was thankful that God gave it to me. I didn't know anything.' Music was a little like that for me.

"I never understood the roots of rebellion in rock and roll — sex, drugs and rock and roll," Cooper added. "That didn't mean anything to me. I just liked the way it sounded, man. And I understood God created music. The Devil doesn't create stuff; he distorts, right? So the devil comes in to steal — and kill and destroy, of course. But he wants to steal something that God made that was good and he wants to mess with it and change it to where he tries to get glory. And I always felt that music glorifies God. So some of this comes from an aspect that, to me, I was pure and I didn't know anything about rebellion. And I never got ready for that basketball game and was, like, 'Man, I feel like this is making me love the Devil.' It was just loud music, and it was cool. So some of it was for that. But I will say, on a deeper level, for me, I absolutely believe music belongs to God. There's something of eternity with music. The Bible doesn't talk about music a lot. But there is something eternal. We know that the angels were singing before we were ever created. We know that music is singing and worship. We know that's gonna be for eternity — it's one of the few things we have here that in some form is going to exist before the throne for always and always and always, when time has ended. So there's something about it that belongs to God. And my aim is, 'Hey, we're not letting the Devil…' It's like that great old Christian song, 'Why should the Devil have all the good music?' Of course, that's way back in the day. But we're not gonna let the enemy steal something that God created. He may have distorted it, but we're bringing that back under the Lordship of Christ, where music and art belongs, because everything is the Lord. The earth is the Lord's, and the fullness thereof — everything in it is his. So that's kind of the way that I view it."

SKILLET's latest album, "Dominion", was released in January via Atlantic.