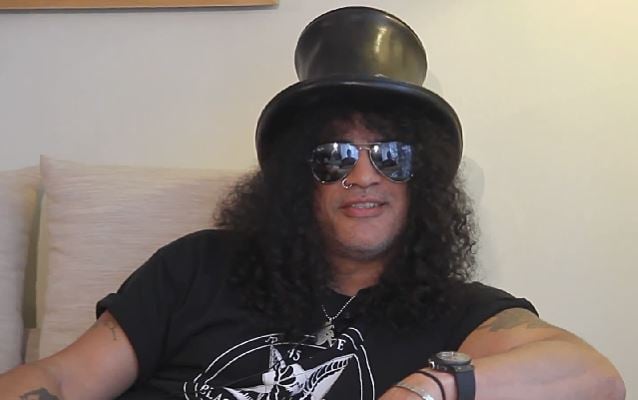 During an appearance on today's edition of "CBS This Morning", Slash was once again asked about the possibility of a reunion of GUNS N' ROSES' classic lineup. Slash said: "It's been one of those things that's been talked about by everybody but us for over the last 18, 19 years."

"Well, we haven't really talked in a long time, but a lot of the tension that you were talking about has dissipated. We don't have all those issues anymore. It's not a lot of controversy. It's something that is more perpetuated by the media, more than anything."

Asked if he would personally want to ever see a GN'R reunion, Slash responded: "I've got to be careful what I say there. I mean, if everybody wanted to do it and do it for the right reasons, I think the fans would love it. I think it might be fun at some point to try and do that."

Pressed on what those "right reasons" might be, Slash said: "I mean, that's a hard one. That just starts to get into a whole complex thing… It's really between the guys in the band."

Slash and Axl have reportedly not spoken since Slash left the band 19 years ago. Rose said in a 2009 interview with Billboard, "What's clear is that one of the two of us will die before a reunion and however sad, ugly or unfortunate anyone views it, it is how it is."

Slash last year told the Irish Examiner that he blames the media for causing "unnecessary conflict" between him and the other members of GUNS N' ROSES. Slash explained "I'm not bored with the fascination with [GUNS N' ROSES]. What I'm bored with is all the brouhaha with stuff the media have no idea what they are talking about... the causing of unnecessary conflict between the original members. It's just a lot of drama and sensationalism — everyone is trying to capitalize on that. I'm sick of it."

Slash, who left the group in 1996, told The Pulse Of Radio a while back that he never imagined he'd still be talking about GUNS N' ROSES years later. "It's weird because the hype and the, you know, sort of mythic whatever about the band has snowballed to where it's at at present, and it's bigger now than it was when the band was still together, which is really sort of, very surreal," he said.