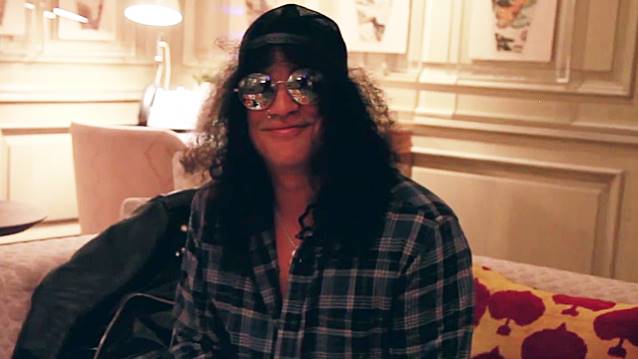 SLASH: There's A Lot Of People That We Tried Out For VELVET REVOLVER That We Don't Talk About

Gary Cool conducted an interview with legendary guitarist Slash (GUNS N' ROSES, VELVET REVOLVER) on May 31 at the Soho Hotel in London, England. You can now watch the chat below. A couple of excerpts from the chat follow (transcribed by BLABBERMOUTH.NET).

On whether he would ever consider using the Internet and social media to find a new lead singer for VELVET REVOLVER:

Slash: "Before we started working with Scott [Weiland], we held auditions back then and everything, at that time, was on CD that we would get. And we would get probably a couple of hundred submissions a week. And we did that six days a week for ten months. And I never wanna have to go through that experience again. [laughs] I mean, there has to be some sort of filtering system. 'Cause a lot of people just don't take it seriously, they just wanna do it for the hell of it, blah blah blah. And for VELVET REVOLVER, I think, probably the best way of going about it just hearing through the grapevine or personally experiencing somebody that just hits the mark."

On whether he gets tired of constantly being asked when VELVET REVOLVER might get resurrected:

Slash: "It goes with the territory. Obviously, it's not broken up; it's sort of in a state of dormancy. And so whenever the right guy [pops up]… Everybody's too busy to be trying to check people out every single day. So when the question comes up, it's, like, 'Whatever…'"

On which vocalist he would choose for VELVET REVOLVER if he could pick any singer, whether they were in an existing band or not:

Slash: "I've done that already. There's a lot of people that we tried out that we don't talk about. The more that time passes, the less rock and roll singers there seems to be. Like, that style of just really, sort of, from-the-heart, guttural rock and roll. It seems to be just getting more and more glossed up. It seems like everybody's… I mean, look at 'American Idol'. And they do the rock-singer bit. I haven't seen it in a long time, but I remember in the first few years it was around, and these singers just don't sound like rock and roll singers. It's hard to say exactly… It's something that I'll know it when I hear it."