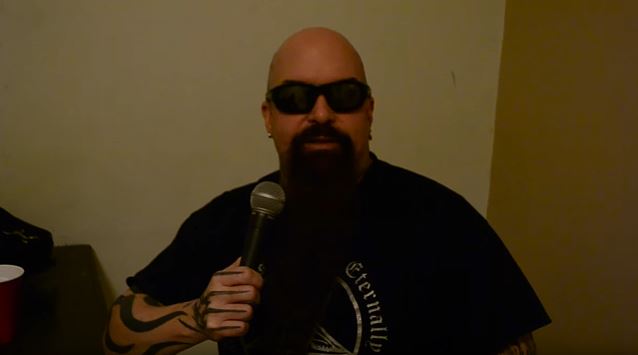 On how he thinks SLAYER's classic 1986 album, "Reign In Blood", would be received if it was released thirty years later:

Kerry: "It's hard to say. I mean, you're taking a moment in time and putting it in a different moment in time. When that record came out, there was still way more taboo than there is now. Even though it still exists, it's not near as preventative [sic] as it was back then. The same things don't scare you, it's what I'm saying. I mean, musically and sonically, it still would be awesome. Would it cause the uproar, being everything that's come out since then? Probably not."

Kerry: "I think Rick was an asset in the early days and then he got popular and pretty much didn't care. I mean, his name's on a lot of records, but I know a lot of those records, it's the engineer that did everything. But in the beginning, he was hands-on, he was way into it, and it was inspiring. But by 'Seasons In The Abyss', 'Divine Intervention', he was an afterthought. And that's not me talking down to Rick Rubin; he just wasn't involved. 'Executive producer' means 'I own the record label. I fronted the money for this.' But it was generally the… Sometimes some of his, like, number one guy beneath him, he started taking a bigger role in our later records, and the engineers did too."

On the progress of the songwriting sessions for the follow-up to 2015's "Repentless":

Kerry: "We do have a bunch of new material that no one's ever heard, and if the lyrics don't change that musically, the songs are done — full production, with [producer] Terry Date from the last record. So I'm gonna work on lyrics with that in mind, but if I get some awesome idea that the song has to change, we'll have to record it again. But I'm sure some of them won't. So it's a very cool place to be, 'cause we've never been in this position with this many songs — they weren't leftovers, they just weren't finished."

On how he decides which songs to complete for an album:

Kerry: "Well, I get excited about some more than others. That could be just because I like the riffs, 'cause sometimes when the vocals get in, I like that song better. But I had a handful I knew I wanted to finish, and the ones that are my favorite songs, I'm gonna finish [those] first. And sometimes a title comes to me, and I'm, like, 'That's a great title for that song. It's got the vibe of that song.' So, yeah, there's two in there with vocals and leads. We'll probably go in a tweak the vocals a little bit. But if they came out as is, they're great. But, yeah, probably five more above that, so that's a good seven, if not eight. And I've got one or two that I've been muddling around on on tour, so there's close to ten already — existing songs. I mean, that's my cutoff. I want ten, and if something comes out, like 'Implode' or 'When The Stillness Comes', those'll just be additional tracks to the ten, whatever those ten are. So, yeah, I would like to get all that done before I go on tour again — at least the music — so I'm, like, 'All right. Here we go. Let's go on tour again. I can make up lyrics when I'm bored.' Then maybe late next year, when the touring cycle stops again, maybe that's when we start thinking about recording. Which is really fast for SLAYER; 'Repentless' has been out thirteen months."

On the possibility of SLAYER retiring: