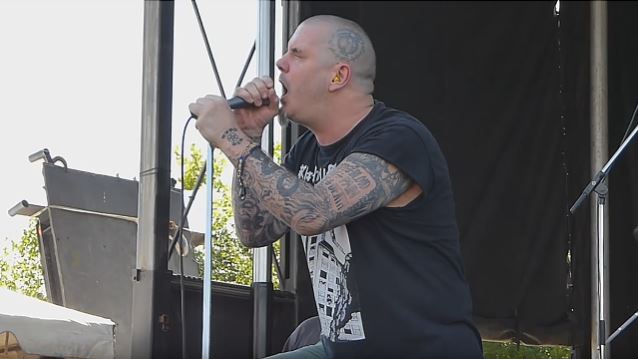 PHILIP ANSELMO On 'White Power' Gesture: 'I Was Playing A Part'

Former PANTERA frontman Philip Anselmo has once again denied being racist after a video surfaced of him earlier in the year giving the right-arm salute and yelling a white-supremacist slogan at a California concert.

Anselmo performed the PANTERA classic "Walk" at the January 22 "Dimebash" event at the Lucky Strike Live in Hollywood in honor of late PANTERA guitarist "Dimebag" Darrell Abbott. As he left the stage, he made a Nazi-style salute. He appeared to say "white power" as he made the gesture, but later claimed he was joking about drinking white wine backstage and was reacting to the audience members up front who he says were taunting him.

Speaking to "The Classic Metal Show", Anselmo pushed back against criticism that he hasn't gone far enough in explaining his actions, saying that his "love extends to every person in this crazy world." "I would say to any critic out there that has terrible things to say about me, look, I owned that moment — I owned the moment," he said (hear audio below). "And it was a dumb, dumb move on my part, because I've dealt with hecklers before. Basically, I was showing the ugly, I was playing a part; it was an ugly gesture. And I've said this before: look, if that joke is not funny anymore and it's worn its welcome out, then so be it. I can grow as well."

He continued: "If I truly, truly upset anyone with that gesture and those two words, then my apology is sincere. But then there's the flipside where I get the feeling that if you look through a certain lens long enough and you're desperately trying to spot something, you're gonna eventually find it, no matter what is; no matter how vague it may be, you're gonna find something. Me? I was blatant; I was blatant and doing what I did on purpose, but with a sense of humor behind it. And anyone with a logical mind knows — knows for a damn fact — that my love extends to every person in this crazy world of all colors, creeds, kinds, shapes, sizes, sexual preference… you name it, I'm for you , baby; I'm on your side."

Anselmo added: "Sometimes these certain people that do look through these lenses, perhaps — and maybe this is just speculation, but perhaps — like they used to say on the schoolyard, 'It takes one to know one,' or maybe the fact that you're looking through this lens is kind of showing who you are as well."

Philip also revealed that the title of the new album from his SUPERJOINT project, "Caught Up In The Gears Of Application", was at least partially inspired by the backlash he received from the "Dimebash" incident. He said: "Well, we are living in a different world today, as far as musicians go and public figures go, and you mix that with the Internet, you mix that with comments sections, you mix that with Facebook, you mix that with every platform given to anybody and everybody… And yes, we are in a new world, I'll say. I guess it takes some adaptation to this new world for a lot of people, and especially a lot of people that have… oh, gosh… harsh senses of humor or loose tongues or whatever. It's, like, everything you say is picked apart, and a lot of comments or whatever or beliefs or reactions are knee-jerk reactions that people get to type up anonymously. And to me, there's a disconnect there. I don't quite know how to put it, but it's being caught up in the gears of application; it's living life in the two-thousand-teens, if you will, and it's only gonna get the way it's gonna get even deeper into the future."

"Caught Up In The Gears Of Application" will be released on November 11 via Anselmo's Housecore record label. The disc was recorded at Philip's New Orleans-area studio, Nodferatu's Lair and was produced by Anselmo and Stephen Berrigan. The effort was mastered by Scott Hull (AGORAPHOBIC NOSEBLEED, PIG DESTROYER) at Visceral Sounds.