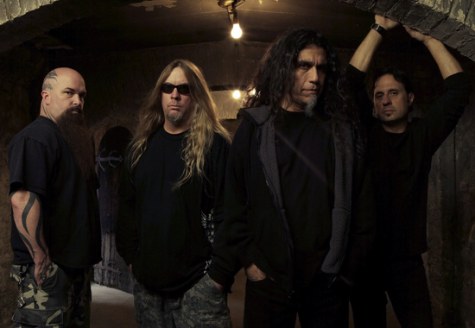 Californian thrashers SLAYER have announced the rescheduled dates for their U.K. headlining tour, with Sweden's THE HAUNTED as support. The trek will kick off on May 26 at the 02 Academy in Leeds, with the band playing seven headline shows, ending with two in London. All tickets for the original shows are valid.

SLAYER's original tour dates had to be postponed due to bassist/vocalist Tom Araya's ongoing treatment for what was diagnosed as a cervical radiculopathy, an occupational hazard for the rocker who is known for aggressively swinging his long mane of hair while performing. Originally, Araya opted for a series of minimally-invasive procedures, and while they resulted in some improvement, they didn't entirely remedy the severe pain, numbness or muscle spasms that Araya continued to experience. Consequently, Araya made the difficult decision to undergo a surgical procedure, called an anterior cervical discectomy with fusion, a relatively routine practice with an excellent recovery rate.

"I think that his just making the decision to have the surgery has helped improve the way he feels," said longtime SLAYER manager Rick Sales. "While no one wants to go under the knife, his doctors are very confident about this procedure taking care of the problem once and for all."

The new U.K. dates are as follows: