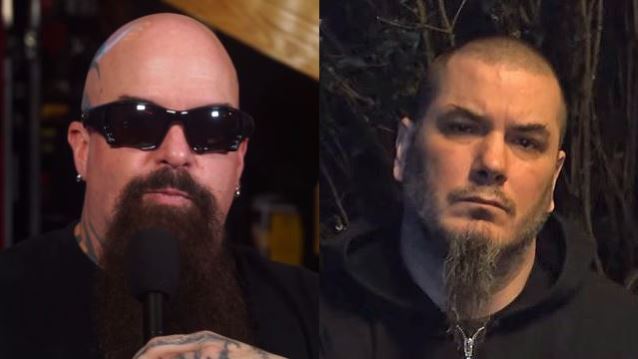 SLAYER guitarist Kerry King has commented on the incident over a month ago when ex-PANTERA singer Philip Anselmo said "white power" and made the Nazi salute on stage. Anselmo later claimed he was referring to drinking white wine as part of an "inside joke" but has since released a video message, saying that he "deserves completely" the "heat" that he has been getting over his actions and claiming to be "a thousand percent apologetic to anyone that took offense to what [he] said."

Asked by Vanyaland for his take on what Philip did and whether he had any advice for Anselmo, given SLAYER's own issues in the past of being called anti-Semitic, King responded: "[SLAYER being accused of anti-Semitism] is all unwarranted; I've said since 1986, if [the SLAYER song] 'Angel Of Death' [about Nazi physician Josef Mengele] was a documentary on History Channel, it would probably win awards, but SLAYER said it — so they're racist. That's just people not knowing what things are about. Now, what Phillip did — I wasn't there, but, of course, I've seen some of it [on video]… [laughs] There's a line I think he crossed a little bit; yeah, he may not come back from that. It was massive."

Several other notable musicians have come out and criticized Anselmo for his actions, including MACHINE HEAD frontman Robb Flynn, who uploaded an eleven-minute video response to the incident in which he called Anselmo a "big bully" and described Philip's behavior as "fucking wrong."

In a message posted to his personal web site in the days following the incident, ANTHRAX guitarist Scott Ian suggested Anselmo show how sincere he is by making a donation to Jewish human rights organization the Simon Wiesenthal Center. He also wrote: "Philip's actions were vile and that should be the focus here; anything else is just noise."