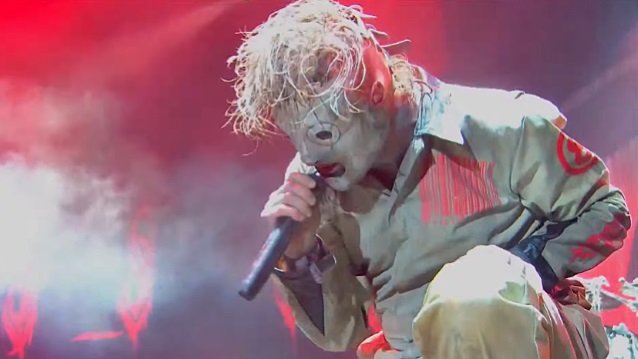 SLIPKNOT: New Song 'The Negative One' Available For Streaming

A brand new SLIPKNOT song titled "The Negative One" is available for streaming on the band's official web site. The track is expected to appear on the group's upcoming album, which is due out sometime this fall via Roadrunner.

**Note**: After listening to "The Negative One" for the first time, you must sign up for an e-mail list before you are able to hear it again.

A music video for "The Negative One" will be released on Tuesday, August 5.

SLIPKNOT singer Corey Taylor told The Pulse Of Radio the band has finished recording the new CD and is now in post-production. "The album is done," he said. "Everything's done. Right now we're just, we're getting the artwork together, we're getting all the other accouterments together, and it's feeling really, really good. We're just stoked, you know. Now it's like, 'Okay, we need to hurry up and get it out,' you know. So yeah, we're really excited."

SLIPKNOT's fifth studio album and first since 2008's "All Hope Is Gone" is also the band's first without late bassist Paul Gray, who died in 2010, and drummer Joey Jordison, who was dismissed in late 2013.

Asked what has been most fulfilling about working on new SLIPKNOT music that he never experienced before, Corey told Full Metal Jackie: "This one, it just feels, there's something weird about this one. Obviously this is the first album we're making without Paul.

"After everything we went through, there's a catharsis that comes with this, being able to throw all the emotion and aggression out that we've been holding onto. At the same time, getting to be creative again. Feeling that juice coming back into us. It's been a real positive experience just from an artistic standpoint, a lyrical standpoint.

"The Negative One" audio stream (hosted by Slipknot1.com):