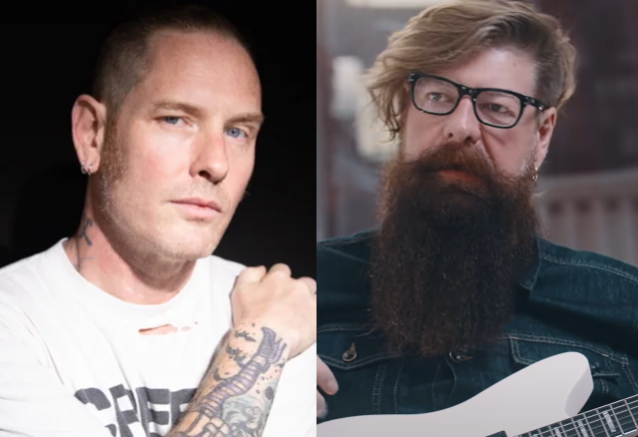 Corey Taylor says that he and his SLIPKNOT bandmate Jim Root have discussed starting a new project together.

Although the guitarist was famously kicked out of the Taylor-fronted STONE SOUR in 2013, the singer has told Metal Hammer magazine that the pair have worked out past differences and are enjoying their renewed collaboration as part of their main band.

"He and I are very different people," Corey said, "and we were both going through our own shit in life. We reconnected, and we're actually talking about doing some stuff on the side, outside of SLIPKNOT and STONE SOUR.

"It's cool to find your friend again," he continued, "and realize that you can find your way back to people that you care about. Honestly, I can't sit here and say that I wasn't responsible for some of the bad feelings. That can only come with self-reflection, and the fact that the things that were going on in my life rippled and affected other people. Once you own up to that, you can start to mend bridges by showing people that you are truly sorry."

Three years ago, Root told Metal Hammer that he and Taylor would have ended up killing each other if he had stayed in STONE SOUR.

"Corey and I are much closer now," he said at the time. "It's the best thing, me leaving STONE SOUR. We would have just ended up killing each other and driving each other crazy. I can't spread myself that thin. I needed it, this band [SLIPKNOT] needed it and STONE SOUR certainly needed it. I just didn't have the time to commit that I'd have liked. I think they were tired of my shitty attitude, that's for sure."

Root said that he was dismissed from STONE SOUR in November 2013, revealing: "I was mad because STONE SOUR wanted to go do a tour and they didn't want me to be a part of it. So I had a little anger, and I had a little bit of depression. I was kind of hurt. But at the same time, it was probably all for the better, because I wasn't really happy in that band anymore."

At the time, Taylor addressed the issue as well, saying: "It was difficult, at first. It put a strain between he and I for a little bit. It was one of those things where the timing just sucked. But at the same time, we knew that, on both sides, we've gotta do what we've gotta do."

Seven years ago, STONE SOUR named guitarist Christian Martucci as the permanent replacement for Root. Martucci was recruited to play on the band's early 2014 tour tour and was confirmed as a permanent member in March 2015 in a Facebook post.

STONE SOUR has been off the road and out of sight since completing the touring cycle for its last studio album, 2017's "Hydrograd". Taylor has been working with SLIPKNOT since then, as well as making his debut solo album, "CMFT". A STONE SOUR live album, "Hello, You Bastards: Live In Reno", came out in December 2019.