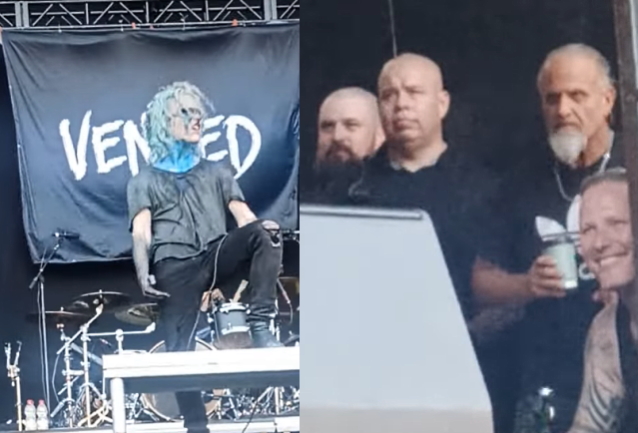 Video of SLIPKNOT singer Corey Taylor and percussionist Shawn "Clown" Crahan beaming with pride as they watch their sons' band VENDED perform at a recent stop on SLIPKNOT's European headlining tour can be seen below.

SLIPKNOT kicked off its summer 2022 European tour on July 20 at Romexpo in Bucharest, Romania. Support on the trek is coming from JINJER and VENDED, the band featuring Corey's son Griffin Taylor on vocals, and Shawn's son Simon Crahan on drums.

VENDED's lineup is completed by Connor Grodzicki on rhythm guitar, Jeremiah Pugh on bass and Cole Espeland on lead guitar.

Formed in February of 2018, VENDED had its first mainstream exposure in 2020 when it performed as part of Knotfest.com's virtual "Pulse Of The Maggots" festival.

Griffin joined his father's band on stage in Bucharest to perform "Custer", the third single from SLIPKNOT's fifth studio album, ".5: The Gray Chapter", which came out in 2014.

In a December 2021 interview with Knotfest's Ryan J. Downey, Griffin was asked if he pays attention to the feedback his Iowa-based metal band has received in the weeks since it released its debut single. He said": "For me, I do see people's responses to it, and I get a lot of great responses, because I love the crowd — I love the fans because they've been there for my dad and they will be there for me and I will not force them to be. But we do get backlash because of the comparison and the similarities [to SLIPKNOT]. But we are different. And there have been times where I've read some hate comments on YouTube and I literally went into the bathtub, filled the bathtub up and just immediately started crying. I was just so fucking in a bad place before we got here. And now I'm in a good place because I'm with my friends."

Griffin, who looks a lot like his father, previously showcased his skills when he joined Corey onstage during STONE SOUR shows in 2017 and 2018. According to The Pulse Of Radio, he's also played cover tunes with Simon, while Clown's daughter Alexandria Crahan-Conway has snapped some of VENDED's previous press pics.