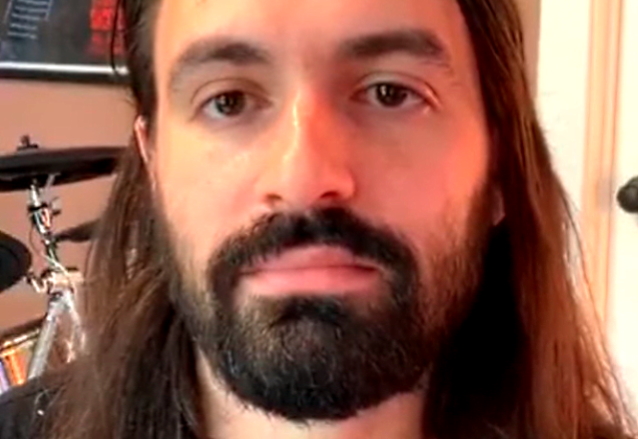 SLIPKNOT's Jay Weinberg spoke to Spain's The Metal Circus about the pressure he felt about joining a band that he discovered when he was a pre-teen, through his father Max, of Bruce Springsteen's E STREET BAND, and leader of the house band on Conan O'Brien's talk show. Asked if he felt like he had to walk on eggshells when he first came into the group more than six years ago, Jay said (see video below): "I wouldn't say I was walking on eggshells. For me, I understood my role in the context of a band changing its dynamic dramatically, working on new songs without two of its founding members [drummer Joey Jordison and bassist Paul Gray]. That was huge for a band that had, at this point, existed almost 20 years or something. It wasn't like walking on eggshells, 'cause I knew the role that I was coming in to play.

"I haven't been in this band as long as they have, so it was a lot of learning," he explained. "And still, to this day, I approach this band with open eyes and open ears, 'cause I think every day, I'm learning more and more. And every day, I think, as an invidual and perhaps as a collective, we get closer and closer to understanding the potential of what the band really has.

"I felt my role, I had to lead with confidence. I was, like, 'I'm here to play music with these guys, and they enjoy it, so I'm gonna enjoy it.' And whatever role that is within the band, it wasn't walking on eggshells, because I had to really… I had to really show up every day. And with time, that doesn't change, but I had to show up every day and blow the doors off the place, or try to. I had to convey to my new bandmates that they made the right decision. And that's something that I feel really strongly about to this day. I don't take my role within the band very lightly — I take it very seriously — 'cause it means a lot to me, and I understand it means a lot to other people. Because before I joined this band, this band meant a lot to me. So I understand how SLIPKNOT's audience perceives the band and makes it a part of their lives as well. So I understand that dynamic.

"Starting with 'The Gray Chapter' and then playing 200 shows and then working on another album that became 'We Are Not Your Kind', and then playing however many shows we were able to play until we got forced to not play any more shows, I had to really bring my all every day," Jay said. "And so whether that's working on new songs and giving my own kind of spin on what I can do within the framework of a SLIPKNOT song, that was important to me, because I'm not gonna emulate anybody, I'm not gonna try to be anybody else, 'cause that's gonna come off as phony, that's gonna come off as disingenuous. And I'm not interested in that, and my bandmates aren't interested in that. So I think what we discovered was that there was a new, exciting sound that was existing in the dynamic between us, and that happened through working on songs that they had been working on before I came into the band, and then when we would work on things together as collaborations, that would bring about songs like 'The Negative One' and 'Custer', stuff like that. That was exciting.

"I think it was the opposite from walking on eggshells. I think it was, like, 'I've gotta knock down the door every damn day.' It was less pressure to be conservative about things and it was more pressure to be emphatic about things and to be, like, overly expressive, and to be, like, 'I've gotta convince you, my new bandmates, that you made the right choice.' That was very important to me, and still remains important to me."