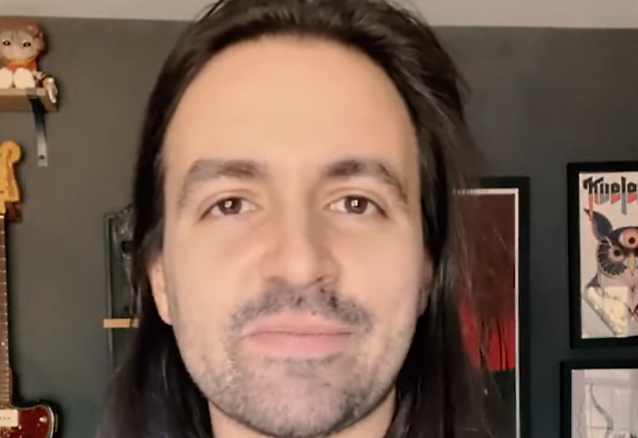 SLIPKNOT's JAY WEINBERG Opens Up About Hearing Loss: I Never Play My Drums Without Hearing Protection

SLIPKNOT drummer Jay Weinberg has recorded a public service announcement about hearing loss for the Hearing Health Foundation (HHF),the largest nonprofit funder of hearing and balance research based in the United States. Check it out below.

In the four-minute clip, Jay says (as transcribed by BLABBERMOUTH.NET): "I'm here on behalf of the Hearing Health Foundation to talk to you a little bit about hearing loss prevention and hearing protection, because it is a vital component of what all of us do.

"I'll tell you a little bit of a story. Back when I first started teaching myself how to play drums when I was about 14 or so, I was kind of holed up by myself with some sound-canceling headphones, listening to my favorite records, trying to teach myself how to play. And that certainly helped — playing loud drums, loud cymbals, but having this kind of hearing protection while I was teaching myself how to actually do it, that was super helpful. But then when it came time to actually collaborating with people and playing music with other guitar players and stuff, I got a very quick lesson in how important hearing loss prevention and hearing protection really is.

"So back when I was 14, I got into a jam room with two buddies from school who started to teach themselves how to play guitar. And we're in a room and we're jamming, but I can't quite hear them because their amps are turned away from me. And I'm playing everything I can, playing hard and it's already — the drums and cymbals — everything is super loud, but I can't hear their guitars. So I have a bright idea and tell 'em, 'Well, I can't really hear your guitars. Why don't you turn it all the way up to 10 and turn both of your guitar amps towards me and then I can hear your guitars?' That was not the most astute decision. And I learned that really quickly. We had a great day jamming, but then the next morning I had no high-end frequencies in my hearing. I thought I honestly lost my hearing altogether, and I was really frightened 'cause I didn't know how to deal with that. And especially when you're recovering from major hearing loss or a hearing loss event like that, the one thing you wanna do to kind of pass the time is listen to music, and you can't even do that 'cause it's too painful.

"So I learned really quickly, at a young age, that hearing protection is an absolute must if you want any sort of longevity and sustainability in playing music," he continued. "So ever since that day, I've never sat down at a kit and played the way I play without hearing protection — not even once. It's not an option. If you want to have a sustainable life in the creative field of playing loud rock music, especially if you're a drummer with… These are dangerous tools that we have and we have to use them carefully and not shortchange ourselves for the experience of playing music and still play super hard and still play super loud, but it has to be done intelligently. And that's where hearing loss prevention comes into play and where the Hearing Health Foundation comes into play.

"I'd like you to head to HearingHealthFoundation.org and check out the 'Keep Listening' campaign, because it is very important, and it's very important to start at a young age to start taking care of your hearing health. For me personally, I don't go to a single show without wearing earplugs; I don't go on stage without wearing earplugs or in-ear monitors where I can hear myself and my bandmates. It's incredibly important, and if I had not worn earplugs and in-ear monitors from a young age, I might have done a tremendous amount of damage to my hearing. So I strongly encourage you, wear earplugs, do it the right way, do it intelligently. You can still rock out, you can still play the way you want to, and you'll be able to play for the rest of your life. So take care of your ears, keep listening and head to HearingHealthFoundation.org."