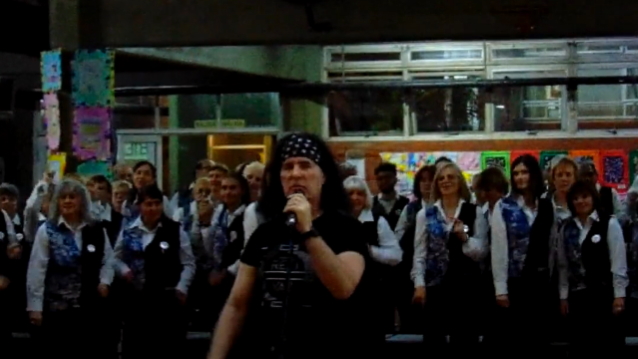 Original AC/DC frontman Dave Evans recently rehearsed a version of the band's classic song "Highway To Hell" with more than 150 singers from Argentina's Kennedy Choir (Coro Kennedy). Video of the rendition can be seen below.

Chrystal Records, along with Coro Kennedy director Raúl Fritzsche, are organizing this version to be recorded with other choirs around the world.

Evans discussed his post-AC/DC career in a recent interview with Argentina's Urbana Play 104.3 FM. Asked if he has any regrets about the way his time with the band ended, Dave said: "I've had a fantastic career. I kept rocking with RABBIT and DAVID EVANS AND THUNDER DOWN UNDER, and I'm traveling around the world now, still recording. So as far as my career is concerned, I've had a fantastic career; I'm still having an amazing time. Bon Scott joined the band, but he was there about five or six years, and he's dead. So it was bad luck for him.

"You can't have regrets," he continued. "I'm having the most incredible life. I travel the whole world. And I'm a solo artist, of course, so I don't have to take a band with me. I have musicians in all different countries. I go wherever I want to go. And I see all the countries and I do what I want to do, not what the band has to tell me to do and that kind of thing. So I have freedom to be where I want to be with the people I wanna be with. And at the end of the day, it's all about freedom — life is about freedom; freedom of choice and being with people that you really love. And I'm lucky to do that."

Evans previously talked about his exit from AC/DC in a 2021 interview with DJ Grant from New Zealand's Galaxy 107 FM. At the time, he said: "You've gotta remember that Bon Scott did a lot of the songs that I already did, like 'Baby, Please Don't Go', we already did that. That's the song that I got Angus [Young, AC/DC guitarist] up on my shoulders, and, of course, he used to watch us doing our show, so he copied that. I understand that he copied what I was doing. And the songs too, and re-recorded them and re-wrote the lyrics to some of the songs that I had already put down. But he was told to do that. I know that he was under instructions to do this, so I don't really hold it against Bon Scott for that, because when he joined the band, he was washed up at the time, and he got a great chance to do something, and he did too. He did a great job, but his lifestyle just let him down."

Evans also talked about the enduring popularity of "Can I Sit Next To You Girl", which was originally released as a single in July 1974 and featured drums by Colin Burgess and bass by George Young (older brother of AC/DC co-founders Malcolm and Angus Young).

"It's one of those songs, I play it around the world — I still do, of course, every show I do — and people love the song," he said. "And it's amazing how many people say to me that's their favorite AC/DC song. I can't believe it. [AC/DC has] 'T.N.T.' and all those great songs, 'Highway To Hell' and all these other great songs, and fans come up to me and say that that's their favorite song."

Earlier last year, Dave was asked in an interview with The Rocker Diaries if he thought "that would be it" for AC/DC after Bon's death in 1980. He responded: "No, not at all. I mean, we all keep going. And AC/DC has had that many players through [the history of] the band. I don't know how many. 20? And three singers, plus a stand-in singer as well.