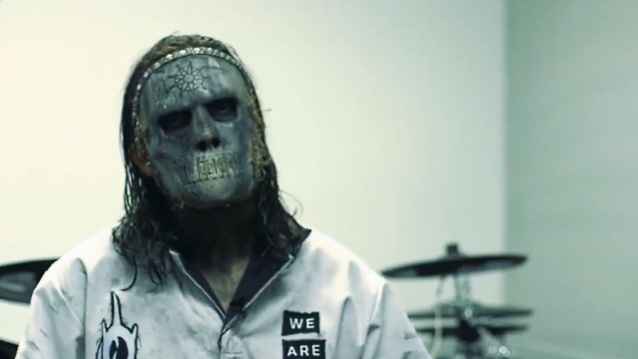 SLIPKNOT's JAY WEINBERG: 'We Are Not Your Kind' Track-By-Track Guide (Video)

Video footage of SLIPKNOT drummer Jay Weinberg offering a track-by-track breakdown of the band's latest album, "We Are Not Your Kind", can be seen below.

"We Are Not Your Kind" arrived on August 9 via Roadrunner Records. The disc was once again recorded at a Los Angeles studio with producer Greg Fidelman, who engineered and mixed SLIPKNOT's 2004 album "Vol. 3: (The Subliminal Verses)" and helmed 2014's ".5: The Gray Chapter".

Weinberg recently said that being in SLIPKNOT has been "the most enjoyable" experience of his life.

The now-28-year-old drummer discovered SLIPKNOT when he was a pre-teen, through his father Max, of Bruce Springsteen's E STREET BAND, and leader of the house band on Conan O'Brien's talk show. He was hooked immediately and was a huge fan of SLIPKNOT by the time he was invited to Los Angeles to try out as replacement for Joey Jordison in 2013.

In an interview with SJC Custom Drums, Weinberg stated about his audition: "After spending a lot of time on the road with different bands, I stopped touring entirely and went back to school," Jay recalled. "My manager, who managed this band I used to be in, calls me and says, 'What are you doing? I have something. I think you'd wanna do it. Can you just trust me and get out here to L.A.?' Without hesitation, I was just, like, 'Yeah! Okay. I can do that.' I didn't know what it was for, but I knew if someone was asking me to come and play drums on something, I wanna kick the shit out of it."

According to Weinberg, playing with SLIPKNOT has been the highlight of his musical career.

"I'm a kid with a dream, and I feel so fortunate and so honored to have been able to hop over the barrier onto the stage and have this opportunity to create and bring some sort of contribution to this band I loved so much," he said. "It's the most enjoyable, self-destructive, euphoric experience, and it takes a lot of blood, it takes a lot of pain, but it's all worth it, because SLIPKNOT is the greatest band — period."

Hit play NOW on your streaming device and follow along in real time: https://t.co/skwar9lPkt

"Not Long For This World"#WeAreNotYourKind#SlipknotListeningpic.twitter.com/z8blgW1CA5