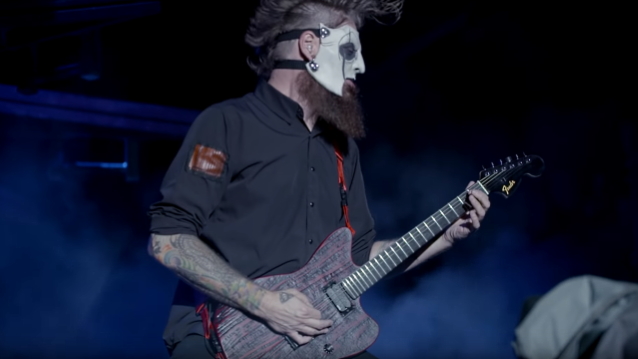 SLIPKNOT's JIM ROOT On Making Of 'We Are Not Your Kind': 'This One Was A Little Bit Different For Us'

SLIPKNOT guitarists Jim Root and Mick Thomson recently spoke to Guitar World magazine about the writing and recording process for the band's latest album, "We Are Not Your Kind".

"This one was a little bit different for us," Root said. "The whole process for this record took probably two and a half, maybe three years. I started putting riffs and ideas together when we were on the last album cycle, just in dressing rooms or whatever, on our Pro Tools rig. And then during the downtime when I was home I was working on arrangements. [Percussionist] Clown and I were also talking about how this time we could really take the time to dive into the arrangements a little bit deeper and also come up with new things. So it was a little bit of a learning curve. I'm not sure we really approached it the right way, but I think we're on a better path from the last record, for sure."

Added Thomson: "One cool thing about the longer time period for this one is that it gives you a longer vision. I've never understood when you see a band go into the studio and write for two weeks or something and then they put out a record. I'm, like, 'How do you know that you even liked that riff?' Because sometimes something seems kind of cool, but after you've played it a few times, you're, like, 'Ehh… I don’t know.' But this time we were going into studios and working on these songs at different points, and then other new things were coming up to go along with what was already on tape. We had a longer time to live with everything and to decide how much we liked or didn't like something."

Continued Root: "Then when it was time to sit down and track the record we actually played as a band, which we didn't really do on '.5: The Gray Chapter'. That album was a little bit more 'built.' Because of the time constraints we had with that one, we kind of built everything off of the demos — we had Jay [Weinberg, drums] play to the demos and then we overdubbed over what he did. But this record, we would do 10 or so takes with clicks on at different tempos, and then we got to a point where we shut the click off entirely and just went for it, and did 10 or 15 more takes with no click. And that was hugely important: it made us sound more like a band on record."

"We Are Not Your Kind"'s sales were boosted by a concert ticket/album sale redemption offer with SLIPKNOT's tour, which kicked off late last month.

"We Are Not Your Kind" was once again recorded at a Los Angeles studio with producer Greg Fidelman, who engineered and mixed "Vol. 3: (The Subliminal Verses)" and helmed ".5: The Gray Chapter".