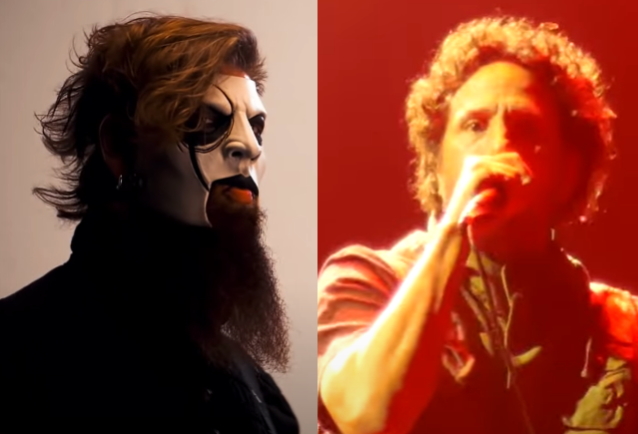 In a new interview with Music Radar, SLIPKNOT guitarist Jim Root spoke about how the lyrical themes on the band's upcoming album, "The End, So Far", have been affected by the "weird cultural moment" that we are living in at the moment. He said: "Everything is so bizarre and so bananas, I don't even know what's going on with the world right now. I couldn't even tell you what is going on with the culture, because, being locked up for two years, and then you come out and everything's upside down, it's really… I don't get it.

"I thought rock 'n' roll, and punk and metal, and all that stuff was meant to be anti-establishment and against the man, and now it seems more and more like, 'Obey!' and do as you're told sorta shit, and that seems backwards to me," he continued. "I don't know if I am the only one that feels that way. I haven't really talked to anyone in the band about it, 'cause we're just trying to get through these tours, through the protocol and the COVID shit, and all that.

"We haven't really checked in with one another to see how we're doing, how we're feeling about the state of the world and all that, but when I hear a band that's saying 'Fuck you, I won't do what you tell me' telling me to do what the government tells me to do, that seems backwards to me," Root added, apparently taking a jab at RAGE AGAINST THE MACHINE, the most fiery political mainstream band of the 1990s, whose 1992 song "Killing In The Name" — featuring the verse "Fuck you, I won't do what you tell me" repeated 16 times — was written as a protest against the abuses of power.

Jim went on to say: "I think people are just so fucking sick and tired of sociopolitical content because you are just hammered with it, no matter if it's a news cycle, a feed on social media, or any of that shit. What I get, when we go out and play shows, is people just don't fucking care about that anymore. People have their issues, and people have their things they are concerned about. Yes, of course, and they always will. But for the most part people just wanna shut off, come out and forget about the world for a while, and they wanna have fun."

Root is not the first rocker to take a shot at RAGE AGAINST THE MACHINE over the relevance of the band's political views. Last fall, SKILLET frontman John Cooper, who is unvaccinated against COVID-19, voiced some strong opinions about coronavirus vaccine mandates on his "Cooper Stuff" podcast, calling the mandates "an insane power grab, an attack on Western values, on freedom, on the things that built the West." The Christian musician also revealed that "the most kickback I have ever received — ever — for my faith has been on my stance on vaccine mandates and mask mandates. It is as if I just — like the unforgivable sin.

In recent months, RAGE AGAINST THE MACHINE has been using the screens at its live concerts to decry gun violence, police brutality and the Roe v. Wade U.S. Supreme Court ruling ending federal protections for abortion rights. According to reviews, crowds erupt when they see "ABORT THE SUPREME COURT." This has prompted one commenter on a Reddit thread to accuse RAGE AGAINST THE MACHINE of being "nothing more than a mall brand band with a commercialized message."

Under The New York Times review, a commenter posted: "Given that [RATM's] politically correct views completely align with those of mainstream media and Democratic-controlled institutions, they should be called RAGE WITH THE MACHINE. I mean, it's not actually that radical or courageous to spout ideas that everyone in your cohort already agrees with."

"The End, So Far" will be released on September 30 via Roadrunner Records.