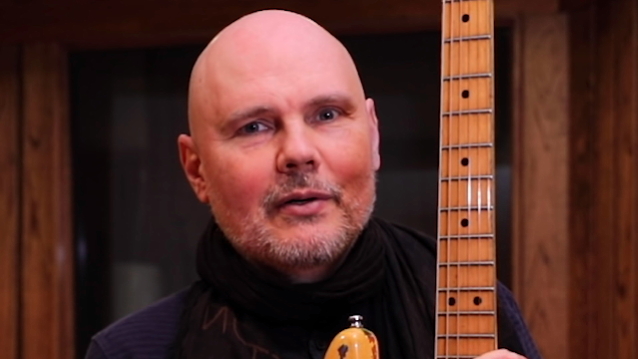 SMASHING PUMPKINS' BILLY CORGAN: 'When I Was Younger, I Was Not Considered Good Looking'

SMASHING PUMPKINS mainman Billy Corgan was interviewed for the latest episode of Spotify For Artists' new music-centric interview podcast "Best Advice". A couple of excerpts from the chat follow below.

On the "brand" image of being a rock star versus staying true to oneself:

Corgan: "For whatever reason, when I was younger, I was not considered good looking. So, my looks were not part of anybody's formula as far as the success of the band. It was never talked about. Photographers would try to stick me in the back of photo shoots with the band and put other people [in front of me]. I swear to God... Well, you know, things change. Now the vampire look is in. But at the time, I was not considered a good-looking person. And people told me this — it's not like I figured this out. People would tell me, 'Oh, you're just not good looking.' Like it was bad for my career. So I had to make sort of critical judgments which is A) that's really not gonna stop me or that's not that important; B) I'm gonna be myself; if I'm a weirdo or a vampire or whatever, I'm just gonna be myself. And now, here we are 20-something years later, and people all the time talk to me about the way I looked, how it influenced them."

On dealing with his ego as a frontman:

Corgan: "Well, that's a tough one, honestly. I don't think I could have done what I did without faith in myself. People all along the way kept telling me I wasn't special. And I'm only talking about music — and I'm trying to be funny here, so nobody get offended — when it comes to music, I am special. I've proven it, right? But people are uncomfortable with that idea. I have no discomfort. If I met somebody who was the greatest pianist in the world, like, why shouldn't we celebrate specialty in a field? People who achieve at the highest level, they're kind of phenoms. Bono's a phenom. If he was a pitcher, he'd be the number one pitcher on a Major League Baseball team. Why do people get uncomfortable about phenoms in the music business? Maybe it's the egalitarian part of music, like we all can be musicians. But the fact of the matter is these people are savants. If you don't wanna think I'm a savant, then I'm cool with that. But I'm saying is don't tell me that Jimi Hendrix or Bono or Kurt Cobain are not savants. They're savants. If you feel you're a savant, and you prove you're a savant, well, at some point, when does somebody give you the savant stamp? There's something that goes on in music that's, like, 'Well, prove it to me. And prove it to me again. And prove it to me one more time.' Would anybody here argue that Prince wasn't a savant?"

"Best Advice" is an audio spinoff from the Webby-Award-nominated Spotify For Artists "Best Advice" video series. Hosted by Kim Taylor Bennett, a former music journalist herself, "Best Advice" features engaging conversations with a full range of guests — from young up-and-coming artists to legacy acts — offering in-depth insights into what it's like to navigate the world of music, commerce and creativity.