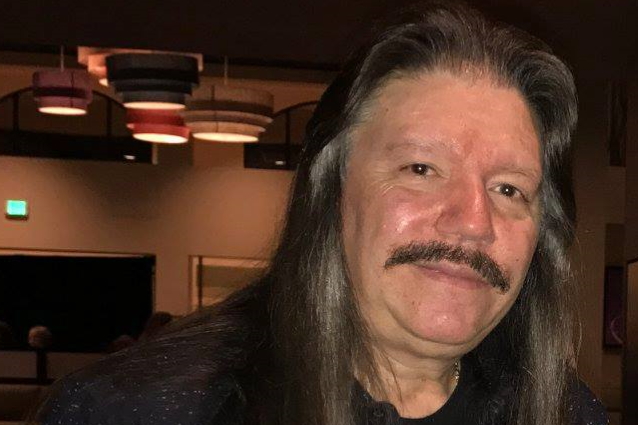 Alex Kouvaris, son of original RIOT guitarist Lou "L.A." Kouvaris, has confirmed that his father died from coronavirus-related complications. He was 66 years old.

Earlier today, Alex released the following message via his Facebook page: "The thought of even having to write this breaks my heart.

"I never thought in a million years that I would lose my father at such a young age, especially to this evil virus we have all become so familiar with... COVID-19.

"It goes without saying that my dad was one of a kind. He had the biggest heart, was full of life, would do anything for anyone, and of course, he was an incredibly talented musician. He had such a way with people, both personally and professionally, it made you want to be in his presence. He'd make you laugh, he'd make you smile, and no matter who you were, where you were from, or what your story was, he would treat you the same way he treated everyone else. You were lucky to know him, lucky to be his friend, and I am so incredibly lucky I get to call him my dad. He was my best friend, we had some of the most amazing talks, and although I had some tough times when I used to live with him in New York, he never gave up on me. There are so many memories and great times we spent together that I will cherish forever. I'd do anything to be able to see him once more, talk to him on the phone, or just hear one more of his ridiculous tunes that he'd make up. Believe me, those who know what I'm talking about know that once it got stuck in your head, you were doomed for.

"I can't help but feel angry that out of all people in this world, this virus chose to take my father's life. He had so much life left to live, and he was so passionate about his new project RIOT ACT. It was all he could talk about, and he was so proud of what the band had become, especially its future.

"I know how many lives he had touched, and although it was overwhelming, please know that it warmed my heart to read all of the memories you all have shared and kind words over the past week. I've tried my best to get back to everyone, but if I forgot any of you, please know it was nothing personal.

"Dad, I miss you so much. Having little to no closure with everything going on in the world right now is going to make things that much harder. I promise to keep strong and carry on as I know you'd want me to. I know you love me very much and proud of the man I have become. I love you, Dad. As they'd say in one of our favorite shows The 100... 'Until we meet again.'"

Lou had shared the stage and toured with JOURNEY, TOM PETTY & THE HEARTBREAKERS, Neil Young and Rick Derringer, to name a few.

In 1979, he recorded for THE VILLAGE PEOPLE as a studio guitarist for Jacques Morali of Can't Stop Productions.

Kouvaris is not the first member of the original RIOT to pass away. Eight years ago, RIOT's founding guitarist Mark Reale died due to complications of Crohn's disease — an ailment he had battled for most of his life. RIOT's original singer Guy Speranza died on November 8, 2003 after a battle with pancreatic cancer. Often regarded as the best RIOT vocalist, he sang on the group's first three full-length albums before being replaced by Rhett Forrester. Forrester himself left in the mid-'80s to pursue a solo career, only to be murdered on January 22, 1994 in Atlanta.

The thought of even having to write this breaks my heart. I never thought in a million years that I would lose my father...