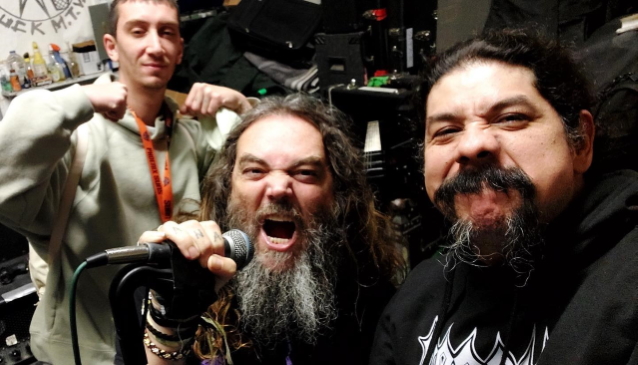 SOULFLY has recruited Mike DeLeon as its new guitarist.

The Max Cavalera-fronted outfit announced DeLeon's addition to the group in a social media post earlier today (Thursday, January 5). SOULFLY shared a picture of Max and drummer Zyon Cavalera along with Mike, and it included the following caption: "Welcome Mike DeLeon, to the SOULFLY Tribe!"

Prior to hooking up with SOULFLY, DeLeon had been a member of PANTERA singer Philip Anselmo's solo band PHILIP H. ANSELMO & THE ILLEGALS, which he joined in 2015 as the replacement for Marzi Montazeri. More recently, Mike filled in for Zakk Wylde at the first rehearsal for the fall 2022 PANTERA shows.

In August 2021, SOULFLY parted ways with longtime guitarist Marc Rizzo due to personal differences. FEAR FACTORY's Dino Cazares played guitar for SOULFLY on the band's most recent run of shows.

SOULFLY is continuing to tour in support of its twelfth album, "Totem", which was released in August via Nuclear Blast. The follow-up to 2018's "Ritual" was recorded at Platinum Underground in Mesa, Arizona by John Aquilino and Arthur Rizk with assistance from John Powers. Produced by Max alongside Arthur Rizk (KREATOR, MUNICIPAL WASTE, CODE ORANGE),the LP boasts guest appearances from John Powers (ETERNAL CHAMPION),Chris Ulsh (POWER TRIP) and John Tardy (OBITUARY). Rizk was also responsible for playing lead guitar on the record. The artwork for the album was created by James Bousema.

Last August, Max spoke to the "Talk Toomey" podcast about what it was like to make a SOULFLY album without Rizzo, who was in the band for 17 years before exiting the group. He said: "Whenever [anything] like that happens, it's an opportunity to do something different, bring in new blood. Especially [with] SOULFLY, there's always been that kind of motto of changing people from time to time.

"I love that the record had a little bit of struggle related [to it]. Those are some of my best records — the ones that are not easy sailing; they've got drama in it," he continued. "And 'Totem' is full of drama. The whole Rizzo thing was its own soap opera. It's, like, c'mon, man.

"So I saw this as an opportunity to do a couple of things. And we took the opportunity, as much as we could, by having Dino playing live [with SOULFLY]," he explained. "It was incredible. And then on the record itself, I had the opportunity to work with the ETERNAL CHAMPION guys, which I'm a big fan. And they kind bring that old-school heavy metal vibe to the solos — Arthur and John Powers. And I love it; I was totally on board with it. It sounded different, fresh and new and exciting. The stuff with Rizzo kind of was always the same — a lot of the stuff was sounding a lot the same — and this is new and different and exciting. And I felt fucking great when I was working on the songs and I would hear the solos coming in, and it was different and exciting. We just did whatever we could for the record.

"So there was a bit of a struggle because of the whole Rizzo thing, and that's kind of worked in the favor of the record, I think," Max added. "'Cause you don't wanna fuck with me, man. You don't. You fuck with me, yeah, there's payback. I just kind of go in that fucking warrior mode and get angry and pissed off and good shit comes out of it, musically talking. So the record has that little bit of anger, a little bit of fire."