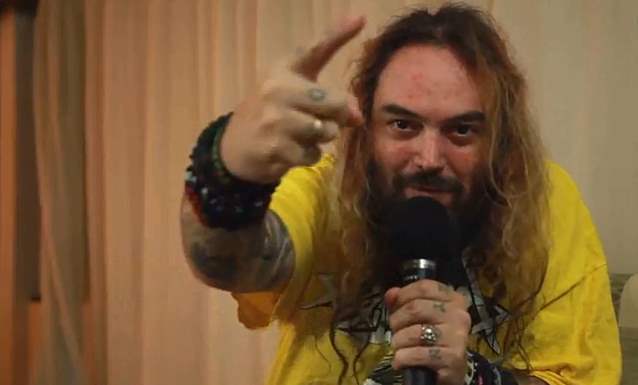 "Lokaos Rock Show" conducted an interview with Max Cavalera (SOULFLY, CAVALERA CONSPIRACY, SEPULTURA) before SOULFLY's August 25 concert at Carioca Club in São Paulo, Brazil. You can now watch the chat below (in Portuguese, with English subtitles).

SOULFLY's ninth album, "Savages", is scheduled for release on October 4 via the band's new label home, Nuclear Blast Entertainment. The CD was produced by Terry Date, who is known for his work with such acts as PANTERA, DEFTONES and SOUNDGARDEN, among many others. Guest vocal appearances on "Savages" include SOULFLY bass player Tony Campos, CLUTCH's Neil Fallon, NAPALM DEATH's Mitch Harris, Jamie Hanks of I DECLARE WAR and Max Cavalera's son Igor Cavalera (of LODY KONG).

Commented Max Cavalera: "Recording 'Savages' was an amazing experience for me. I was so excited to work with Terry Date, whom I consider to be one of the best producers of all time. He has done some great records and we have been in contact for awhile since he mixed three SOULFLY albums in the past. He came to see SOULFLY whenever we played in Seattle, and we finally made it work that he would be the producer for 'Savages'.

"My teammates were awesome. Marc [Rizzo, guitar] did some crazy guitar noises and we did a 'Mars Part Two' at the end of 'El Comegente'; it's very LED ZEPPELIN-influenced and Marc kicked some ass on it.

"I wrote 'El Comegente' with Tony Campos. It's in Portuguese and Spanish and it's about Vargas — a Venezuelan cannibal from the '80s. He is the Hannibal Lecter of the Andes. Crazy shit!

"I worked for the first time on a full album with my son, Zyon. Before recording the album I first worked closely at home with him in preproduction, and it was great to spend weeks on the songs with Zyon, shaping the sound of the record.

"Zyon did a great job and he hits really hard just like his uncle Igor.

"It was amazing recording with my son. A whole record! A dream come true for a father whose life is dedicated to metal. 'Savages' is a celebration of all that."