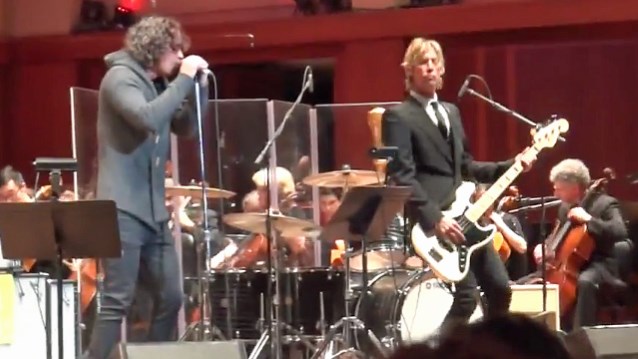 Cornell, Ament, Gossard and Cameron surprised the audience by playing two songs — "Call Me A Dog" and "Reach Down" — by SOUNDGARDEN and PEARL JAM's one-off 1991 project TEMPLE OF THE DOG.

Check out a review of the concert by the Northwest Music Scene.

MAD SEASON's sole album, 1995's "Above", was reissued in 2013 and McCready told The Pulse Of Radio not long ago that revisiting it was bittersweet. "That was a record I couldn't listen to for a really long time, just because of Layne and Baker both dying, and the darkness that had kind of followed that record," he said. "I'm very proud of it, and a lot of fans have come up to me and said that it's their favorite record and it's made a difference in their lives, so that made me kind of happy to know that it did that."

This was the Seattle Symphony's fourth annual "Sonic Evolution" concert.

The event also featured the premieres of orchestral works inspired by NIRVANA and PEARL JAM.