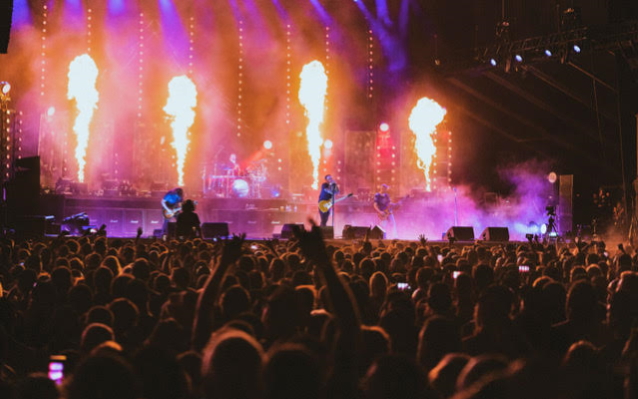 STAIND Guitarist On First Show In Five Years: 'It Was Amazing To Be Back On Stage And Playing Those Songs Again'

STAIND played its first full live show in five years this past Friday night (September 27) at the Louder Than Life music festival in Louisville, Kentucky.

Opening the show with the classic "Eyes Wide Open", from the band's 2011 self-titled album, to the roar of an energized crowd, STAIND played a set packed with its biggest hits, including "So Far Away", "Right Here", "Fade" and the No. 1 smash single "It's Been A While", one of the most played songs in modern rock radio history.

"It was amazing to be back on stage and playing those songs again with Aaron, Johnny and Sal," said guitarist Mike Mushok. "The crowd at Louder Than Life couldn't have been better, or given us a better reception. Looking forward to Foxwoods this weekend and Aftershock… should be fun!"

Danny Wimmer, founder of Danny Wimmer Presents and creator of Louder Than Life, said: "STAIND has been part of my family since the late '90s and has been a big part of my career. I'm so proud to be a part of getting STAIND back on the road again. They feel more fresh now than ever, and their production was the best I've seen STAIND have. Welcome back! The rock world needs these songs. Now all I need to do is get them to write a new record."

STAIND will wrap up 2019 with two special shows that will be recorded live in Mashantucket, Connecticut at Foxwoods Casino on October 5 and 6.

Fans on the West Coast can catch the band's final performance of the year at the Aftershock festival in Sacramento, California on October 11.

Prior to Louder Than Life, the last time STAIND performed was back in August 2017 at the "Aaron Lewis And Friends" benefit concert in Northampton, Massachusetts. The event saw three of the band's original members — Mushok, singer Aaron Lewis and bassist Johnny April — playing a three-song acoustic finale with longtime drummer Sal Giancarelli. It marked STAIND's first live appearance in three years.

Earlier in the month, Mushok told the Louisville Courier Journal about the Louder Than Life gig: "For us, it's going to be great to be able to get back on stage and play these songs. We're definitely going a little bit bigger than we have in the past. And we've always kind of been a great-live-show-and-backdrop kind of band. This one will have a few more bells and whistles that we're going to be busting out on these upcoming shows. So I think it'll be exciting for everybody — not only the audio, what we're playing, but visually as well. It should be a great show."

Asked by "Rock Talk With Mitch Lafon" if the STAIND reunion dates will lead to further activity from the band in 2020, Mushok said: "That's a really good question, and one that I wanna know the answer to as well. For me, I think it's kind of like you dip your toe in the water and you see how it is. It's, like, 'Let's do these shows and let's see how it goes.' I think everybody's hoping that everything is good and we have a great time back out on stage playing these songs again, which I'm really looking forward to do. And hopefully there's more to come after that."

Mushok, who has spent the last four years recording and touring with ex-THREE DAYS GRACE vocalist Adam Gontier in SAINT ASONIA, recently told iRockRadio.com that STAIND was under no obligation to make an album at this stage of the band's career. "We don't have a label," he said. "It would be great to write some music. It doesn't have to be a full record at this point. We have a studio, and it would be easy to do. I think right now, it's, 'Let's get in a room together. Let's play together again. Let's do a couple of shows and see how it goes,' and kind of take it from there."