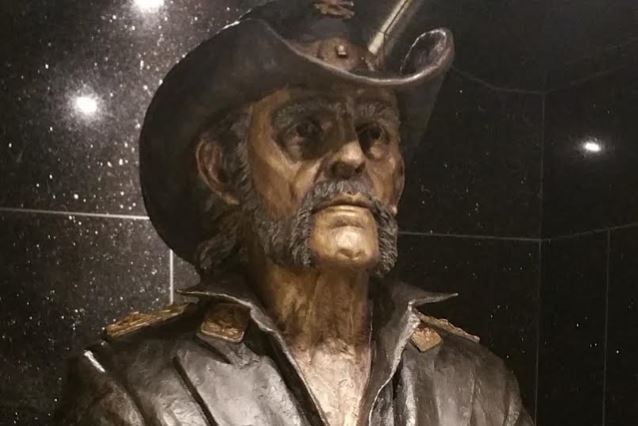 Video footage and photos of the unveiling are available below.

Los Angeles-based artist Travis Moore was selected to create a realistic depiction of Lemmy for the life-size cast bronze statue, which stands at just over six feet tall and will be permanently housed in a special shrine that was constructed in the patio bar area at the Rainbow.

Travis initially sculpted the likeness as an 18-inch maquette that was then transferred to a life-size sculpture, which was molded in wax and ultimately poured and cast in bronze.

Moore told Loudwire that he and the team behind the campaign tried to find an image that typified Lemmy to base the statue on.

"I know they were searching for that hat-coat combo," he said. "Photographer Robert John had taken so many good pictures of him and I think that was about the time that they were at the Grammys and 'Ace Of Spades' was re-charting. There was really a resurgence for him and you can see that it was a happy time and he looks healthy and good.

"We just wanted to stay away from portraying him in a way that wouldn't be proper, and he needed to be rocking, a tough-looking dude with a full face and that was the idea.

"There was initially some debate about would he be with a guitar? Would he be sitting at the bar? Would he have a bottle of booze? There were a lot of different options, and coincidentally, even the photo that Robert took, he's standing there smoking a cigarette. We took that out, more of a liability reason, because someone could break that joker off or get caught on that.

"We don't need lawsuits or anyone injured or definitely have the statue damaged on top of anything else. But there was a lot of consideration that went into this thing and everyone involved, their number one focus was honoring Lemmy."

Moore told Sky News about twenty people worked on the statue and it took around five months to build.

"I think it looks a lot like him. It's a compelling image," he said.

"I think it will offer some closure. I think Lemmy is finally home."

Katon said in January: "Lemmy was dedicated to us. Now is our chance to say 'thank you.' Travis will create the best Lemmy sculpture on the planet."

MOTÖRHEAD manager Todd Singerman told LA Weekly that he never interfered in Moore's design process. "This is for the fans. Nothing corporate," he said. "Not the label, nothing. This is a fan thing and we tried to stay out of the way." He added that there are plans to expand the tribute with a "Lemmy Lounge," which will temporarily live at the Rainbow and possibly become the actual bar inside a separate "Motörhead Bar & Grille," which Singerman said he's working on, along with a major Lemmy tribute concert and a MOTÖRHEAD museum that will house some of Lemmy's musical and military memorabilia.

Lemmy passed away at his home in Los Angeles on December 28, 2015, only four days after his 70th birthday. A memorial in his honor was held on January 9 at the Rainbow Bar & Grill, and it extended across much of the Sunset Strip.

Posted by RAINBOW BAR AND GRILL on Wednesday, August 24, 2016

Unveiling of Lemmy statue at the Rainbow! #motorhead!

The Lemmy statue was unveiled last night at the Rainbow and it was like fighting through a mosh… https://t.co/OPLhZsuRpE 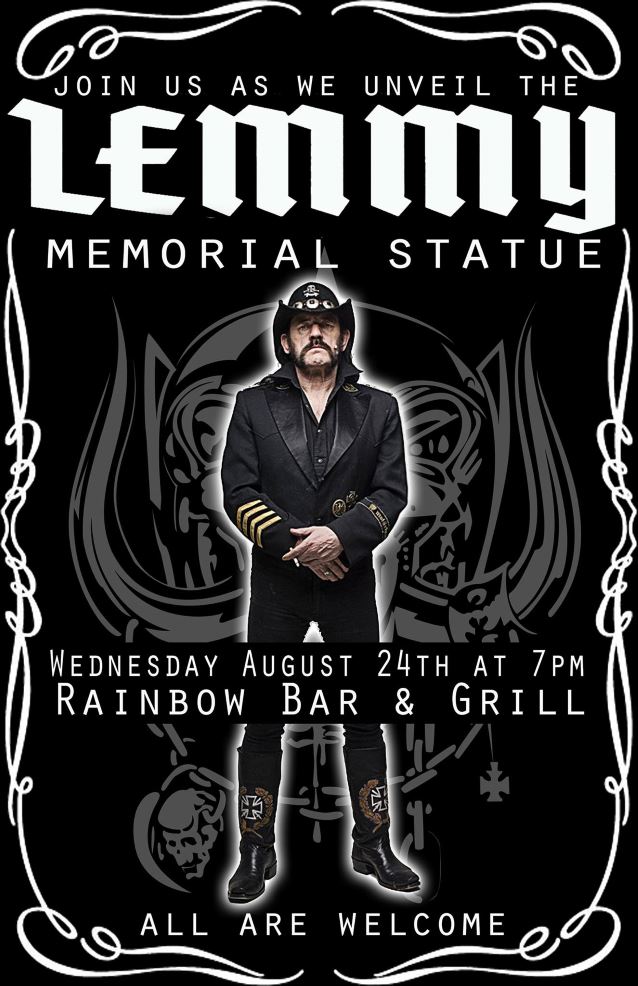