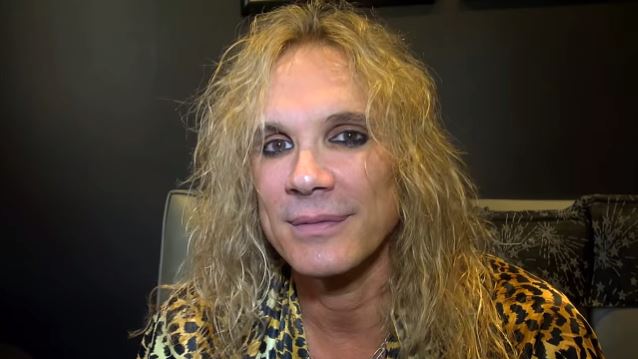 STEEL PANTHER's MICHAEL STARR: VAN HALEN Was 'The Heroin Of Rock For Me'

Mark Weiss of RockScene.com recently conducted an interview with vocalist Michael Starr of Los Angeles glam-metal jokesters STEEL PANTHER. You can now watch the chat below.

Speaking about his early musical influences, Starr said: "For me, when VAN HALEN came out, that started the heavy metal of the '80s as I know it today. David Lee Roth, Eddie Van Halen… it was awesome, man. And I would study those videos and just, like… I watched 'Jump' probably four or five thousand times back in the day on MTV. And every now and then, [if you were] watching MTV, you [would] have to watch TRIUMPH or THE FIXX to get to VAN HALEN, which was a bummer… It's all these other stupid bands… But I love that stuff. That was, like, the main artery… That was, like, the heroin of rock for me — VAN HALEN."

STEEL PANTHER is currrently supporting JUDAS PRIEST on a North American tour. The trek kicked off on October 1 in Rochester, New York and will run through mid-November, wrapping up in Tacoma, Washington.