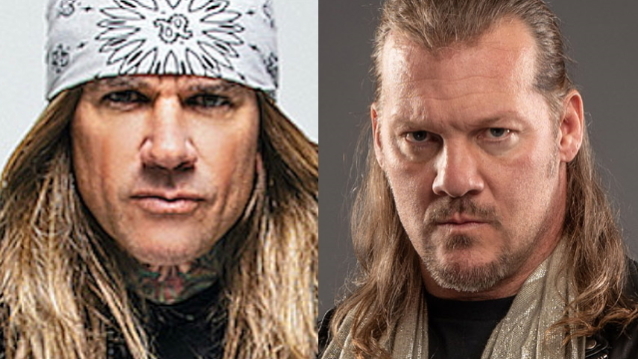 Last Thursday (July 16),Jericho challenged Bach to a "singoff" with "no effects, no tuning, no bullshit" in response to Sebastian's allegation that Chris "mimes to a tape" during FOZZY's live shows. "Bas is a great singer...but I'm better," Chris wrote on Twitter." The wrestler-turned-singer added: "I've never mimed anything ever! I will fucking sing in your face anytime, anyplace dude. I've been a fan & a defender of u since day one...but don't u ever question my rock abilities!" Bach fired back: " You're full of s*** bro. Every clip on the Internet is you miming to a tape. I will sing in your f****** face anytime. Wrestling is not rock and roll. I will show you f****** rock and roll. Check your texts set up The Sing-Off I am ready when you are".

On Wednesday, STRYPER's Michael Sweet defended Jericho, writing in a social media post: "[Chris] doesn't have anything to prove as a singer, a wrestler or a person. He's achieved success and made quite the name for himself. He's about as active as anyone I know and is also a great guy with a big heart. He's also my friend… Chris is a very talented individual and a grounded human being. He doesn't need validation from anyone. He's made his mark and will continue to do so."

After BLABBERMOUTH.NETreported on Sweet's comments, Zadinia — whose real name is Darren Leader — took to his Twitter to share a link to the article headlined "MICHAEL SWEET Defends CHRIS JERICHO Over Lip-Syncing Allegations: He 'Doesn't Have Anything To Prove As A Singer'", and he included the following message: "I'm with this. Jericho is a Fucking rock star and one of the coolest motherfuckers in this business."

I’m with this. Jericho is a Fucking rock star and one of the coolest motherfuckers in this business. https://t.co/W4taPfPM2v