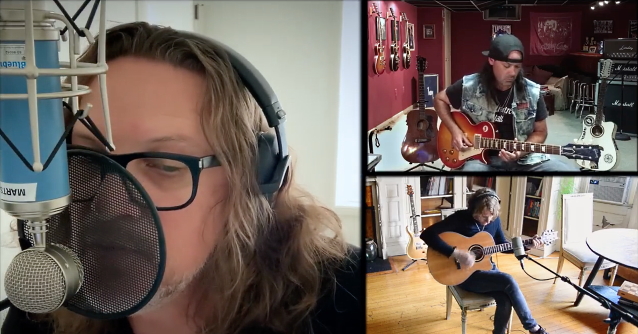 CANDLEBOX has released a riveting new rendition of Buffalo Springfield's 1960s iconic protest anthem "For What It's Worth".

According to frontman Kevin Martin, this is the first in a series of protest cover songs that the band will release over the next few months, with a possible EP scheduled for the near future. The track was recorded individually at each member's home and mixed by CANDLEBOX guitarist Island Styles. In addition to the CANDLEBOX lineup, the song also features special guests Sean "Memphis" Hennesy on acoustic guitar and BJ Kerwin (THE LAST YEAR) on drums.

CANDLEBOX unveiled its version of "For What It's Worth" with an emotional video that depicts scenes from united "Black Lives Matter" protests from across the country as well as live footage from the recording. The video was produced and edited by Carlos Novais, sound engineer, production manager and tour manager for CANDLEBOX.

"In these times of uncertainty, it's important that we take care of one another," said Martin. "We had a blast recording this song and can't wait to do more and get music out to our fans."

CANDLEBOX was scheduled to release a new album this spring, but due to COVID-19, it has been pushed to a later date.