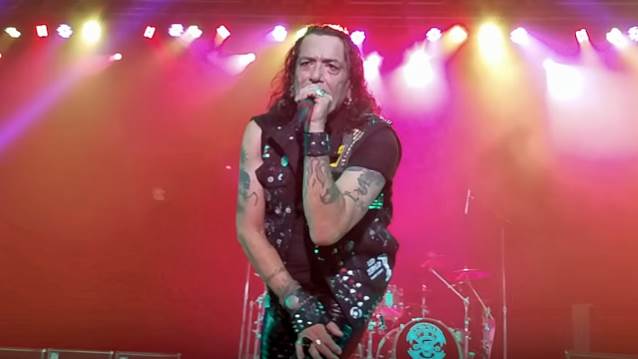 STEPHEN PEARCY: 'WARREN DEMARTINI Was Not Fired' From RATT

RATT singer Stephen Pearcy says that Warren DeMartini "didn't wanna go out there" and play shows with the band, leading to the guitarist's departure from the group.

During an appearance Monday (July 9) on the "Trunk Nation" radio show on SiriusXM, Pearcy spoke about the circumstances that caused DeMartini's exit from RATT. "Waren just didn't wanna go out there," he said. "And when you have a corporation or a company, that company doesn't cease if the majority wants to move forward.

"We wanted to clean house, and that's it, and go out and enjoy ourselves for once," he added. 'Enough drama. We've been through enough."

"I'm just moving forward — Juan and myself — and just trying to keep some legacy involved.

"It's very simple — you either like what you're doing or you don't," he said. "And we do. But it has to be with the right people. It's not like we need to hire Jimmy Page or somebody. We're gonna work with people that we have a great time with."

According to Pearcy, he and Juan "thought things were going copacetic" with DeMartini "but later found out there were other things going on with this guy, and he just didn't wanna partake in these shows. And that's just how it turned out," he said. "Hey, all I know is we didn't fire the guy. I don't tend to dwell on things, so it doesn't bother me. I just move forward, and that's what we did. We wanna go out and have a good time and celebrate. It's no big deal.

"Warren is no longer in the group — his choice; not ours," Stephen clarified. "The company is one thing, the corporation is another, but being in a band, that's a whole another world."

Stephen confirmed that George Lynch (DOKKEN, LYNCH MOB) was approached as a possible replacement for DeMartini, but that the two parties could not come to an agreement.

"If we wanted to get a big name, it would have went down and that would have been that," the singer said. "But it's all scheduling, what bands they're in, what they're doing — it involves quite a lot of things. I don't know if they're on the road, if they're with other bands, if they're in the studio. So we had to take all of these things into consideration.

"With George, it was one of my first… I brought it up first. And we got hold of him. And with much respect, it just didn't jell. I mean, not with him playing, 'cause he's re-recorded some RATT songs with me before and things were great. So with much respect, I think George is a phenomenal guitar player. It just didn't work out. But it was nothing out of the ordinary, if you're hiring or trying to pull in somebody. We want this to last for a bit. We're not just going into it, like, 'Okay, let's go do a bunch of shows.' We wanted to go into this, like, 'Okay, we wanna record a couple of new songs. We wanna tour the world next year. We wanna do things that we haven't been able to do in about a year or two.' And that was the bottom line. But much respect to George. I mean, he's phenomenal. It's not like we don't know each other and we haven't played with each other."

Asked about the rumor that former OZZY OSBOURNE guitarist Jake E. Lee was asked to step in as DeMartini's replacement, Pearcy said: "No, he wasn't approached. We love Jake. He goes back to [Stephen's pre-RATT band] MICKEY RATT, before the original guys, with me, so, of course, that would have been a great contender. But no, we never went there.

"We just don't know what these guys are doing," Stephen added. "Like I said before, they have other bands, they have other projects, records, they're doing this, so you don't waste time going, 'Okay, let's get on the road with RATT with these new guys and then they've gotta pull out and do their solo stuff or they've gotta do their bands. That's not gonna work."

Pearcy also confirmed that there are plans for the current lineup of RATT to record and release new music before undertaking a more extensive tour next year.

"What we're gonna do this time around is we're going to record a few songs and release it as we see fit," he said. "We're not gonna go into a full record until we've put a few songs out there and not prove ourselves. 'Cause if it's Juan and me — we've written songs together for years. He's a great singer guy; I'm the singer guy. We just know what we do. It's not as complex as people are making it or trying to make it. It's very simple. We're gonna go out there and we do wanna record a few new songs, yeah. And we will. We'll put a few out there before the next tour, next year — 2019."

Asked why he and Juan chose not to reveal the identities of RATT's newest members prior to this past weekend's concert, Stephen said: "We just wanted to work people in and not have to change midstream — find out, 'Okay, it's not working with this individual' or something. We wanted to know exactly what was happening. And the word got out anyway a day before the show, which is no big deal. I just like to keep things under cover until you're ready to go. And we were ready to go. And now the next show, I'm sure, it's gonna be more of an ass-whippin', 'cause now we got our feet wet."

I think we have a @theRATTpack problem!