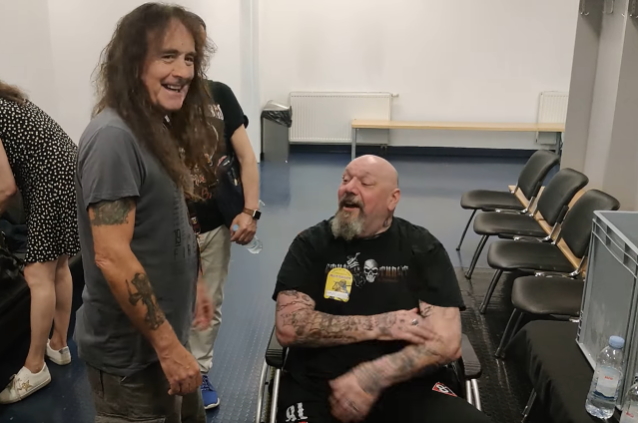 Former IRON MAIDEN singer Paul Di'Anno came face to face with the band's bassist Steve Harris for the first time in many years last night (Sunday, May 22) before MAIDEN's concert in Croatia.

Harris, whose group kicked off the 2022 leg of its "Legacy Of The Beast" world tour at the 22,000-capacity Arena Zagreb, came out before the show to greet a wheelchair-bound Di'Anno and chat with him for a few minutes. Paul has spent the last few months in Croatia receiving physiotherapy and lymphatic drainage treatments in preparation for his upcoming knee surgery.

Video and a photo of Paul's get-together with Steve, courtesy of Stjepan Juras, a MAIDEN fan and author of many MAIDEN-related books, who is taking care of Di'Anno during his stay in Croatia, can be found below.

Kastro Pergjoni, operations director of the Cart & Horses pub in Stratford, London, England where IRON MAIDEN made its live debut in 1976, who recently raised thousands of dollars so Di'Anno can undergo his long-delayed knee surgery, discussed his fundraising efforts during a 2020 appearance on the "Uncle Steve's Iron Maiden Zone" podcast. Asked if he has approached the members of IRON MAIDEN themselves to contribute in some way to the Di'Anno campaign, Kastro said: "Myself, no, I haven't, to be honest, because I don't wanna put things… What's the best way to say it now? It's not up to me to go to them, because I have no connections with IRON MAIDEN themselves. Even when I [need to approach] Steve, I go through his friends or his sister sometimes or close friends that he's got to get stuff from him. But to go to MAIDEN for something that is related to MAIDEN, I don't think that it is me personally, or Cart & Horses, the ones to contact them. I'd love if they come forward and just cover whatever is left or say whatever, but I don't think it's down to me to go to MAIDEN. Because [Paul's] got friends and he's got connections with MAIDEN more than I have, so if MAIDEN wanted to, or if somebody else wanted to, they would have done it. But so far, nothing, unfortunately, no."

Di'Anno played his first solo concert in seven years Saturday night (May 21) at the Bikers Beer Factory in Zagreb. The show was filmed and parts of it will be included in a documentary about Di'Anno, to be directed by Wes Orshoski, co-director and producer of the acclaimed 2010 film "Lemmy" about the MOTÖRHEAD icon.

It's happening ladies and gentlemen. If you want to know more, please visit www.maidencroatia.com/warhorse

Very emotional to see Paul watching performance of song Iron Maiden, after he left the venue to avoid huge traffic jam after the show. Shot for history!