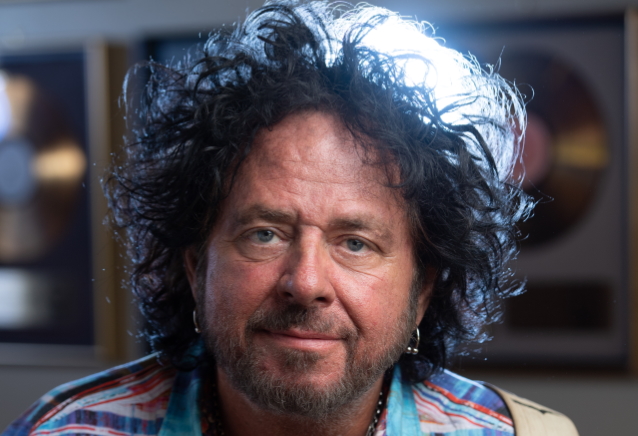 STEVE LUKATHER On TOTO's Future: 'We've Paid For The Name; Let's F**kin' Use The Name'

Steve Lukather has given an update on TOTO, the health of members past and present, and the end of the last version of the band. The guitarist made his comments while chatting to Eonmusic about new solo set "I Found the Sun Again", which will be released on February 26 via The Players Club / Mascot Label Group.

Speaking about the end of the band that completed the "Forty Trips Around The Sun" tour which celebrated four decades of the AOR giants, Lukather revealed that all had not been well within the band towards the end of the jaunt, which lasted from 2017 to 2019. "It was bittersweet because we knew it was coming to an end," he said. "There was some legal [issues]. It was hard. There was some people that didn't get along. It started out great, and ended poorly — lawsuits and crazy shit."

He continued: "It was unpleasant. It was a sad ending to something that was at one time beautiful. Like a marriage gone wrong, I guess. Sad, but I don't have any bad feelings. But it's a bad experience."

Lukather, who has continued with a new version of TOTO along with singer Joseph Williams, went on: "We put it to bed and then we brought it back to life again. Joseph and I said, we're, like, 'Well, we've paid for the name. Let's fuckin' use the name,' and I put together another band with some different guys."

Giving an update on TOTO's founding member David Paich (keyboards) who was forced to leave the final tour due to health issues, Steve said that unfortunately, his participation in any future TOTO activity is now unlikely. "We [Joseph and I] were the only two guys that really wanted to keep working. David can't, medically, because he's not well; he can't travel at all."

Going on to talk about former frontman Bobby Kimball, who voiced hits "Africa", "Hold The Line" and more, Lukather revealed that the singer too is suffering from health ailments. Steve said: "I'm still talking [to him]; Bobby and I are cool. He's got dementia. He's not doing well. He's mentally not right. He's ten years older than me, so he's, like, 73 years old. Man, he lived hard. His mind is just — when you talk to him, he's normal for a second, then he starts talking about his childhood or something."

The guitarist went on to candidly revealed how the loss of close friend Eddie Van Halen has affected him. "Ed was one of my closest buds," he said. "I'm still fucked up over this loss. It broke my heart. I kept the last text: 'I love you.' 'I love you too, man.'

"The world lost a guitar hero. I lost my friend, so it hit me a little harder than it would hit anybody else. I'm not family, but me and him were really close, that's all I can say, and it broke my heart".

Elsewhere, Steve gave an update on the rumored career-spanning TOTO documentary. "There's never going to be a film on TOTO," he said; "[There's] too much bad blood in certain areas, and litigation and legal. I'm doing a documentary — I am; we're working on one now. I mean, we were working on it last year, but fucking COVID kicked in. Sony was backing it, and I had Slash, and Ringo [Starr], and all kinds of crazy people in it. We were just starting to get into it and it was really getting interesting, and then we had to stop. So, until people can travel again and we can actually be together in the same room, it's on hold".