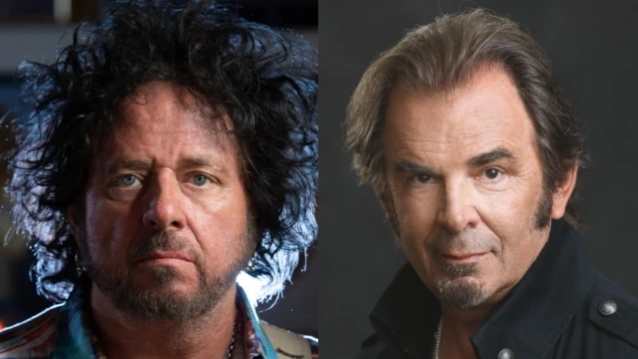 Steve Lukather discussed his son's engagement during an appearance on the "Behind The Vinyl" podcast. Clarifying that Madison's mother is not Cain's current wife, Donald Trump's controversial spiritual adviser Paula White-Cain, who prayed for a mass abortion of "Satanic pregnancies" this past January, Steve said (hear audio below): "The crazy woman, that's not her mom. I mean, we all laugh at that and go, Ah, wow!' No offense to Jonathan or anything like that — if that's the way he wants to live, that's cool. Jonathan and I are friends since I was a teenager, and I love him and I respect him, but with some of that stuff, you've just gotta go, 'Really, really?' That's all I'm gonna say about that, 'cause we're relatives now, or we're gonna be."

Steve went on to predict that the news of his son's engagement to Jonathan's daughter will be met with a certain amount of amusement by the mainstream music press, which has never been particularly kind to either band.

"You can imagine all these hipster critics going, like… they'd lose their mind, 'You mean there's gonna be a TOTO/JOURNEY baby? Nooooo!'," he said. "I can just see Jann Wenner's head of Rolling Stone [magazine] explode and take a fucking box cutter and cut his throat, you know what I mean. So for that, I laugh. But she's a wonderful girl. And I love Jonathan. I'm a huge fan of JOURNEY. Those guys are my friends, you know what I mean, and I respect the fuck out of them. But there's an irony to this that you just can't deny."

When the "Behind The Vinyl" interviewers commended Steve for having a sense of humor about the whole thing, he said: "Fuck yeah! I mean, Jonathan was laughing. We've both been mistreated by the press since day one, you know what I mean, and now the combination of the two has gotta be, like, 'Noooo! What if it's a musician? Noooooo!' Get ready to be a meme, that's all I said. It's a good thing I have a sense of humor about it because when this gets out, the amount of shit that people are gonna give us is hilarious. You've gotta have a sense of humor, dude.

Madison's mother is Jonathan's second wife, Elizabeth Yvette Fullerton, with whom he has two other children, twins Liza and Weston, born in 1996. He and Elizabeth divorced at the end of 2014.

The 27-year-old Madison is a pursuing her own career as a singer, having taken part in the "blind auditions" on an October 2018 episode on NBC's hit reality series "The Voice". Admittedly battling stage fright, she sang Alanis Morissette's "You Oughta Know", but was unable to get the judges to turn their chairs for her.

The 33-year-old Trev is himself a guitarist, whose three-piece rock band LEVARA recently released its first single, "Heaven Knows". A full-length album will follow in 2021.