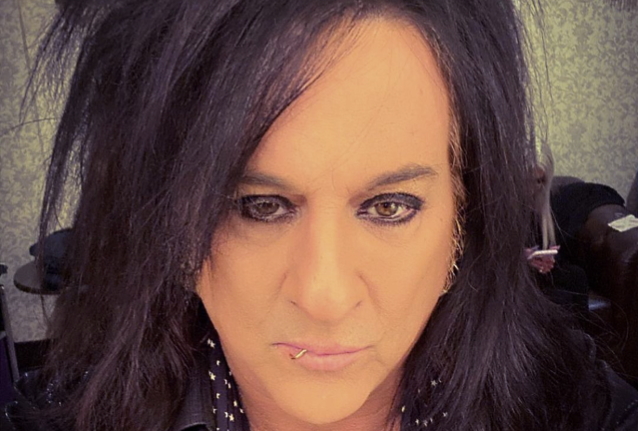 STEVE STEVENS Opens Up About His COVID-19 Battle

During an appearance on yesterday's (Thursday, January 6) episode of SiriusXM's "Trunk Nation With Eddie Trunk", Billy Idol's longtime guitarist Steve Stevens spoke about his recent battle with COVID-19, the disease caused by the SARS-CoV-2 coronavirus.

"My wife and I, we've been so careful," he said (as transcribed by BLABBERMOUTH.NET). "And I think now with this omicron [coronavirus variant], it's just so virulent, and we managed to get it. But not too bad… There was, like, one day that I kind of felt a little bit tired, a little fatigued.

"What had happened was we did a benefit show in Los Angeles that Dave Navarro [JANE'S ADDICTION] and Billy Morrison [Billy Idol] did — 'Above Ground' — [in late December] and evidently a lot of people got ill there," he continued. "So we weren't the only [ones]. The phone calls started, 'Hey, how're you feelin'? Because you might wanna get a test.' 'Oh, shoot.' But, yeah, nothing too bad."

When asked by host Eddie Trunk if he would have known that he and his wife had contracted COVID-19 had they not been tested, Steve said: "We would have known. My wife ran about a 102[-degree] fever one night. And I went, 'Something's up.'"

Recent studies of infections triggered by omicron — compared to that of the delta and beta outbreak — have indicated the infections caused by the new variant were more contagious, but not so severe.

"With Idol, we have really strict protocols, because we're out, and there's, like] 40 people [between the] band and crew and everything; we can't really afford to have it shut down," Steve said. "I've done two tours with Billy, and everybody managed to stay negative and everything. But I think this omicron is really… Everybody I speak to has been through it."

Based on early studies, those who are up to date on their COVID-19 vaccines are far less likely to be admitted to hospital with the omicron variant than the previous delta strain. However, the higher transmissibility of omicron means the risk of health systems being overloaded during the winter period is still quite high.

Omicron is reportedly killing an average of 1,200 people each day in the United States, and the fact that it is roughly twice as contagious as delta and four times more than the original virus means the less virulent virus can still cause enough hospitalizations to overwhelm health care systems here and abroad, especially among the unvaccinated who are elderly or have preexisting conditions.

Thanks to @Stevestevens for joining today from the Vegas studio on #TrunkNation . Replays tonight 10-Mid ET @siriusxmvolume 106 or anytime @SIRIUSXM app. pic.twitter.com/8E0ffGnNh2