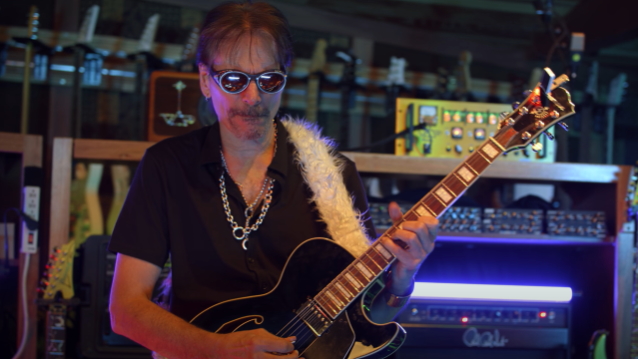 Earlier this month, filmmaker Alan Berry released a 77-minute documentary covering the life of legendary guitarist Steve Vai from 1960 to 1990. "Steve Vai The Documentary: His First 30 Years (1960-1990)" contains hundreds of Vai-centric facts and stories that even the most ardent fan will not have known. Complete with a Vai-esque quirky sense of humor, the video covers Vai's life growing up, attending Berklee College, playing with several artists like Frank Zappa, ALCATRAZZ, the David Lee Roth band and WHITESNAKE, the recording of both his solo albums "Flex-Able" and "Passion And Warfare", plus Vai's role in the movie "Crossroads" and how he helped create the JEM guitar.

Speaking to Andy Hall of the Des Moines, Iowa radio station Lazer 103.3, Vai stated about the film: "The first thing that I was stunned over was the producer, Alan Berry, how much research he did to get to the bottom of little stories and things like that. I mean, he really did an amazing job unearthing things that I didn't think anybody would care about or know about. But they turned out very… They're fun — fun to watch; funny stories of my youth and whatnot. But it's nice to feel that there's a document out there for those that are interested. And it's entertaining. It transcends whether you like guitar or not even. So it's charming. And it's nice that I didn't have to do anything. [Laughs] And Alan was kind enough to show it to me beforehand, and I helped him with a couple of facts and pronunciations and things like that."

Vai is a virtuoso guitarist, visionary composer, and consummate producer who sculpts musical sound with infinite creativity and technical mastery. At age 12, he started taking guitar lessons from Joe Satriani. At 18, he began his professional musical career transcribing for, and then playing with, the legendary Frank Zappa. Vai's full discography encompasses more than 70 albums, including many with Zappa, others from his stints with David Lee Roth (just after Roth left VAN HALEN) and WHITESNAKE — at the peak of its popularity — along with live releases, collaborations, compilations, and orchestral works.