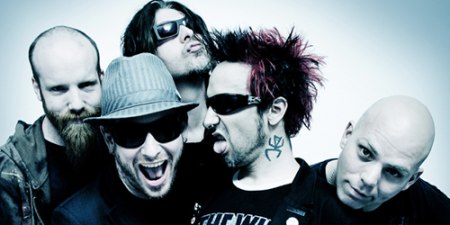 STONE SOUR was interviewed on the March 21 edition of the nationally syndicated radio show "Rockline" with host Bob Coburn. You can now listen to the program at RocklineRadio.com.

STONE SOUR's third album, "Audio Secrecy", has sold 159,000 copies in the United States since its September 2010 release, according to Nielsen SoundScan.

STONE SOUR singer Corey Taylor said that "Hesitate" is one of the standout tracks on the latest STONE SOUR album for him. "It's a bittersweet song, " he said. "It's about letting go of something that you want with all your heart that you know is just gonna do nothing but damage to you. And it takes a special kind of heart and a special kind of courage to do that. And not a lot of people have that kind of courage.

"They would rather sit in a relationship for years and wallow in it because they're afraid of being alone. And this is about having the courage to say, 'You know what, I'm getting away. I'm gonna be on my own, and I'm gonna be OK.' And those first few steps are the worst, but once you get each foot in front of the other, it's a lot easier."