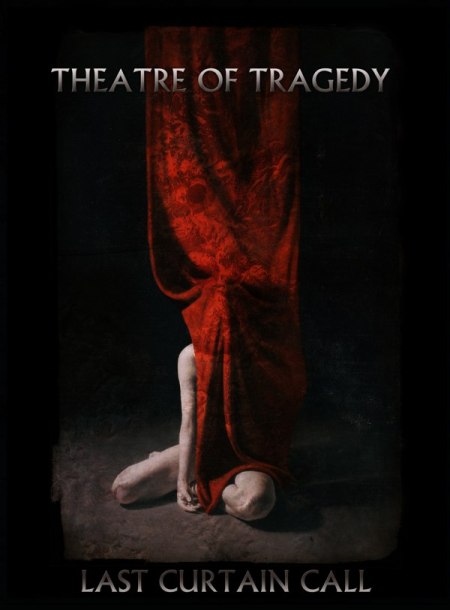 Norway's THEATRE OF TRAGEDY has issued the following update:

"After six months of hard and intense work, the complete DVD and live CD is finally finished!

"The tracklist for the DVD will be, as earlier announced, with 18 tracks spanning the whole career of THEATRE OF TRAGEDY . The concert film will have a running time of 94 minutes and has been carefully put together and edited by our longtime friend Erlend A. Sørby and the result is stunning! In addition, there will be a half hour 'on-the-road' movie from the last tour of the band, footage from the last-ever rehearsal October 1, 2010 (with fans attending) as well as in-depth interviews with all band members shot in January 2011. The concert film will feature both stereo and 5.1 Surround Sound. Audio was mixed by Alex Møklebust and mastered by Chris Sansom at Propeller Mastering. In addition, there will be a live CD included with the bands pick of their live favorites.

At the same time, there will be a double live CD released for the people that don't own a DVD player or prefer the audio only.

"The THEATRE OF TRAGEDY members hope you all will enjoy this as much as we enjoyed making it!"

The "Last Curtain Call" concert DVD will be released on May 20 via AFM Records.

The "Last Curtain Call" cover artwork was created by Haakon Hoseth and can be viewed below. The original painting was by the band's longtime artist and friend Truls Espedal.

THEATRE OF TRAGEDY announced in March 2010 that it was calling it quits, stating, "This has not been an easy decision to make and we have thought about this for a long long time. We finally agreed to this during the production of our latest album, 'Forever Is The World'.

"Over the years all of us have strived to combine the THEATRE with everyday life but in the end it has proven more and more difficult.

"We have come to appreciate our family lives and jobs, which makes it very hard to continue this life of rock 'n' roll on the road."

THEATRE OF TRAGEDY released a a limited-edition tour version of its seventh album, "Forever Is The World", in March 2010 to coincide with the band's European shows. The set included a new EP called "Addenda" and featured 10 tracks of b-sides, rarities, remakes and remixes.

"Forever Is The World" was released in September 2009 via AFM Records. The follow-up to 2006's "Storm" was recorded at Room 13 studios in Oslo with producer Alexander Møklebust, who has previously worked with ZEROMANCER, SEIGMEN, GÅTE, MONOMEN and DELAWARE, among others. The mastering was handled by Bjørn Engelmann at the Cutting Room in Sweden.

"Forever Is The World" was made available in three different versions: a limited digipack with one bonus song, a very limited double vinyl version with two bonus tracks (one exclusive to the vinyl edition!) and a regular jewelcase.