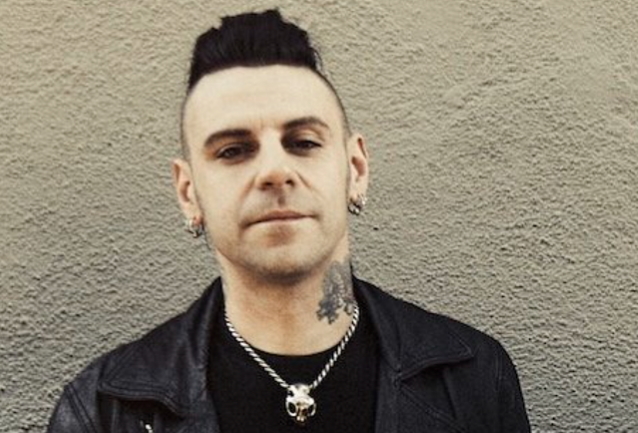 STONE SOUR's CHRISTIAN MARTUCCI: 'People Have A Really Warped Perception' Of What It's Like To Be In A Touring Rock Band

STONE SOUR guitarist Christian Martucci, who also plays in Corey Taylor's solo band and BLACK STAR RIDERS, spoke to Evan Rubinson and Josh Maloney of Dean Guitars about he has been dealing with the coronavirus pandemic. He said (see video below): "Well, when it first happened, everybody was freaking out, obviously. Everybody kind of thought it was only gonna be a few weeks of a lockdown and they'd get it under control, and, obviously, we're still here several months later.

"Corey, we weren't supposed to record his [solo] album until he was done with the SLIPKNOT cycle, and once everything got canceled, he decided now is as good of a time as any to do it," he continued. "So I've actually been busier, I think, in lockdown, than I was before. We ended up recording 25 songs in two and a half weeks — the music [was recorded] live — so I only had a couple of weeks to prepare what I was gonna do on all of these songs. So, obviously, that was a major time crunch to kind of get it together. Then we rehearsed for a couple of days; we spent three weeks in [Las] Vegas or whatever. And I came back.

"Corey's actually been doing things to keep us busy somehow," Christian added. "We're still writing songs, we're making videos, and we've got some special stuff lined up. I'm pretty grateful to actually have the ability to work on stuff. Plus. I'm constantly working with Ricky Warwick from BLACK STAR RIDERS on new music. So I've been really busy."

Martucci also lamented the fact that the pandemic has knocked every touring musician way off course, with playing concerts and selling merchandise as their means of survival.

"Unfortunately, artists make their living on the road — after everybody else gets paid, of course," he said. "People have a really warped perception of what this is. They don't get that, really, the only reason to put yourself through this is because you don't have a choice. You're either a musician or you're not.

"When I was a kid, everybody thought that you get a record deal and you make an album, and all of a sudden, you're Vince Neil cruising down Sunset Strip in a limo with a hot tub in the back of it, surrounded by girls," he added. "I can assure you that's not what it is — at least not in this day and age. You do it because you love it."

Corey's debut solo album, "CMFT", was released on October 2 via Roadrunner Records. Taylor recorded the effort with his band consisting of Martucci and Zach Throne on guitar, Jason Christopher on bass, and Dustin Schoenhofer on drums. The LP was completed at Kevin Churko's The Hideout Recording Studio in Las Vegas with producer Jay Ruston, who has previously worked with ANTHRAX, STEEL PANTHER and STONE SOUR, among others.

This past August, Taylor said STONE SOUR had "run its course," explaining in an interview that he and his bandmates had "decided to kind of put STONE SOUR on indefinite hiatus. We've put it on the shelf for now," he said. "Everybody's kind of going and doing their own thing."