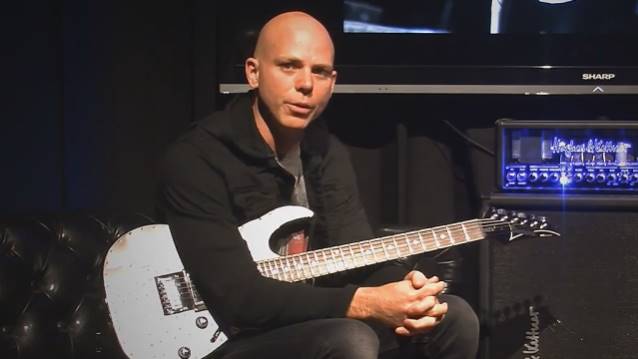 Guitar amp company Hughes & Kettner has uploaded video footage of STONE SOUR guitarist Josh Rand explaining the features of the GrandMeister 36 amp head and talking about his live setup. Check out the clips below.

Rand last fall released the "The Sound And The Story" DVD via Fret12.

Get to know Rand's one-of-a-kind story — a story which, until now, has never been told. Learn his music the way it was meant to be played, by learning straight from Josh himself. Get his story the way it was meant to be told, through the people who know it best! With a massive amount of guitar content, lessons, exercises, interviews, gear tours, and more, this DVD gives you all-access the STONE SOUR guitarist. Whether you are a guitarist or a fan; you will experience the instrumental sounds and life stories that have combined to make him the musician he is today.

"Josh Rand: The Sound And The Story" is available via Fret12.com.

Asked if he takes formal lessons or online classes, Rand told Ultimate-Guitar.com, "I have in the past; I actually have my certificate from Berklee. I just got it last year. Right now I only have the 'rock guitar' certificate, which is, like, six courses but I'd like to get my 'master guitar,' which is eight."

He added: "The day you think you know it all, you don't evolve anymore. You can learn new things every day and never master the instrument. I've come to open up to a lot more styles of music where I used to be one of those guys who thought if it's not metal, it sucks. Listening to new kinds of music has opened up new worlds for example there is a song on ['House Of Gold & Bones'] part 2 called 'Sadist' and the pre-chorus to that is very jazzy guitar-wise. It uses ninths and sevenths and jazz style chords and that is directly because I took those classes and I've begun to incorporate those different styles into what we do."

Rand also revealed that the first guitar he ever got was "a knockoff Fender Stratocaster. He said: "I got it when I was nine for Christmas. It was cool for that day and then it got put in a closet and eventually it got given away, I believe. Then when I started playing again, I played bass. I got a Squier bass. Then when I started playing guitar again, the first guitar I got was an RG 560 that was black. I was quite a bit older that that time."