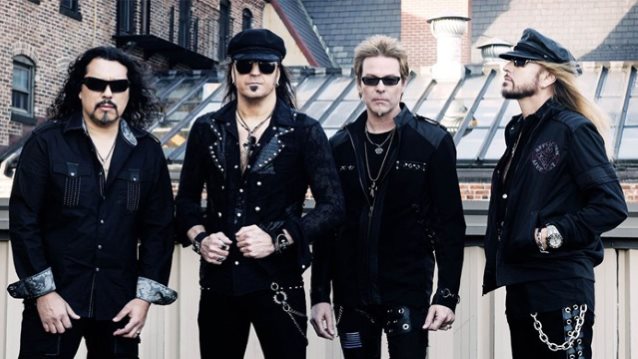 The remaining members of STRYPER have blamed Tim Gaines's "erratic and hostile behavior" for their decision to part ways with the bassist.

After months of rumors, Gaines confirmed his departure from the openly Christian group late last month, telling KNAC.COM: "I am officially no longer a member of the band. It's been out there for about a year now that things have been going sour. It hasn't been officially said by either myself or the band, but, yeah, I'm no longer working with them."

Tim claimed that "all hell broke loose" after he "ended up getting a divorce, which is taboo as far as Christianity, I guess." He added: "I'm not the only guy in STRYPER to have gotten a divorce. Everybody in the band is married to divorced people. And I'm the bad guy, but everybody else has done it too, so? Whatever. Live in glass houses and everything will be exposed at some point or another."

"We wish Timothy Gaines nothing but the best, and we will always remember the history and the good times that we all shared together.

"We have done our best to remain courteous and professional despite the barrage of disrespectful comments, posts and tweets that have been made public time and time again by Tim and [his new wife] Brandee on what seems to be a daily basis.

"The accusations that have been made that our decision to terminate Tim is based on his divorce couldn't be further from the truth. We have all struggled with separation and divorce in our relationships over the years, and it has never affected anyone's position within the band.

"The band decided to take a hiatus in order to give Tim time and space to work through his personal issues. However, based on Tim and Bradee's intentional, erratic and hostile behavior, which has damaged STRYPER and threatened to undermine the band's ability to go forward professionally, we were left with no other choice but to part ways. Tim and Brandee have left their scars and have hurt us in more ways than you can imagine.

"We were also forced to retain legal representation based on a public post/threat that Tim made about suing the band in 2016.

"Tim is our brother, and we love him, but this has become a toxic relationship at this point and due to that, we cannot continue on with our mission and stay true to who we are and what we represent with Tim in the band.

"We're excited about the future and we will be making an official announcement very soon about our new album, tour and bassist.

"We love our fans and we appreciate your support and patience as we work through these changes. The best is yet to come!"

Gaines is currently working with FAITHSEDGE singer-songwriter Giancarlo Floridia on the band's fourth album, tentatively due in the fall of 2018.