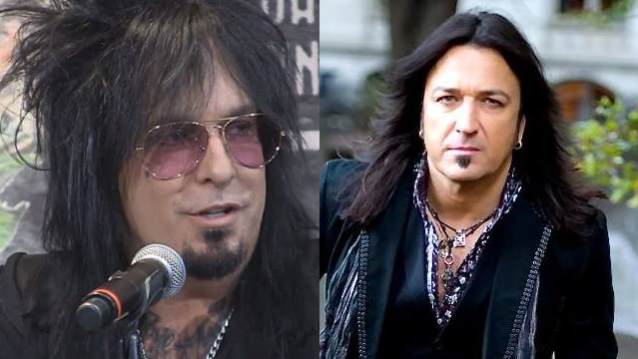 STRYPER's MICHAEL SWEET: 'I Meant No Disrespect To NIKKI SIXX Or MÖTLEY CRÜE'

STRYPER frontman Michael Sweet claims that he meant no disrespect to Nikki Sixx or MÖTLEY CRÜE when said that much of CRÜE's official biography, "The Dirt - Confessions of the World's Most Notorious Rock Band", and Sixx's memoir, "The Heroin Diaries: A Year In The Life Of A Shattered Rock Star", is "stretched" and "bullshit."

In a brand new interview with Music Enthusiast Magazine, Sweet was asked if it was important for him to focus on the reflective and positive stories from his career in his newly released autobiography, "Honestly: My Life And Stryper Revealed", instead of writing extensively about tales from the darker moments. "It was, but at the same time it was also equally important for me to be honest and open, and that's why I do get into some of the things which took place during the 'Against The Law' period that caused three marriages to end and mine to almost end," he said. "I get into a lot of that stuff in the book."

He continued: "Is it as controversial as MÖTLEY CRÜE? No, but I think half of what we hear about MÖTLEY CRÜE is B.S. anyway, like when you hear stories about Nikki Sixx dying three times and whatnot. It's, like, how stretched is that? I don't know, man! [Laughs] Nothing against Nikki Sixx.

"Half of the stuff I read in these autobiographies I just kind of roll my eyes at, because I just think that a lot of these guys just did so many drugs and drank so much booze that their minds aren't too clear in terms of remembering the past exactly as it went down.

"I hope that doesn't come across as me being a jerk, but I guess the big point I'm trying to make here is my book… These are good or bad, boring or exciting, these are the true stories of my life.

"I guess that's what I meant by the statement, you know? You're probably not going to find in my book what you might find in a MÖTLEY CRÜE book, and that's a good thing! [Laughs]"

On May 5, Sixx posted his response to Sweet's comments, writing on Facebook: "Non addicts talking shit about people who have fought for their live's to beat their addiction…..‪#‎MichaelSweet‬ ‪#‎OhHeHasABookForSale‬? ‪#‎GodBlessTheChildrenOfTheBeast‬ ‪#‎SobrietyRocks‬ ‪#‎Sad‬"

Earlier today (Friday, May 9),Sweet responded to Sixx's remarks, writing on Facebook: "I meant no disrespect to Nikki Sixx or MÖTLEY CRÜE and certainly not to addicts or recovering addicts. I was simply trying to convey the importance of not believing everything you hear (rumors) and giving my own opinion of some of the over-embellishments (in my opinion) that some autobiographies seem to portray. I've never even met Nikki before and I have nothing bad to say about him. I do believe that my words were taken out of context but then again, that happens to all of us from time to time.

Here's what I wrote in my book: 'If you've picked up this book in hopes of reading stories about me hiding in a closet shooting up heroin, buying prostitutes with all my earnings or beating the crap out of a club owner because he looked at me funny, you should probably read the MÖTLEY CRÜE book instead, because you won't find that here. I’m not better than they are, but my story is different. I’m not an angel, either, and I think you'll find some pretty eye-opening stories, and I hope — whether you know my music or not — you'll find them enlightening or at least entertaining.'"

**Update**: Shortly after this story was published, Nikki Sixx responded to Michael Sweet's apology by stating via Facebook: "Apology accepted … Addiction is a hard thing to understand, especially for people who have never lived through it … Good luck with your book, Michael."

Sweet was not the first musician to question the authenticity of "The Heroin Diaries: A Year In The Life Of A Shattered Rock Star", which was supposedly taken from actual journals Sixx kept in the late '80s while in the grip of a near-fatal heroin addiction. In a March 2010 interview with Brazil's Dynamite magazine, Sixx's former MÖTLEY CRUE bandmate, singer John Corabi, stated about "The Heroin Diaries": "I love Nikki to death, and this is just my opinion... Everybody that I know that's done heroin, they do heroin and they're out. And I find it very hard to believe that somebody can do heroin and then have the foresight to write everything down. Everybody that read the book said it was great, though; it was a great book. It's great reading, it's a great book... More power to him, you know."

In February 2008, former MÖTLEY CRÜE producer Tom Werman slammed "Heroin Diaries" as "totally deluded" and "stunningly inaccurate." In a letter to the New York Times, Werman took issue with Sixx's assertion that the producer chatted on the phone during the recording of "Theatre of Pain", "Shout at the Devil" and "Girls Girls Girls" while Sixx did all the work.

"If this distortion of reality is the result of Sixx's past heroin habit, then his diary is truly nothing more than a pipe dream, and the events to which this book refers may simply be the needle-induced fantasies of an attention-starved junkie," Werman wrote.