Michael Sweet of Christian hard rockers STRYPERwas interviewed on a recent edition of "The Five Count" radio show in Mankato, Minnesota. You can now listen to the chat in the YouTube clip below.

Michael Sweet felt compelled to partner with Childhelp after learning that almost half of all children who have been abused consider suicide. His intention was for the heartfelt lyrics to connect with these kids and hopefully offer some peace to those in need. Bringing added attention to the Childhelp National Child Abuse Hotline, which offers an immediate 24/7 professional crisis counselor on call, and championing the Childhelp Speak Up Be Safe in schools, Michael Sweet is sharing a message of crisis intervention and prevention education. "I'm Not Your Suicide" is a song with a message of hope, and through the partnership with Childhelp, illustrates to children a positive alternative through the track's lyrics.

Sweet's "I'm Not Your Suicide" album, and his first autobiography, "Honestly: My Life And Stryper Revealed", will be released on May 6 via BIG3 Records.

"I'm Not Your Suicide" is available for pre-sale at MichaelSweet.com. Fans who pre-order the full album will be able to instantly download the song "Taking On The World Tonight" (featuring TNT singer Tony Harnell) and be registered to win a guitar used in the recording of the album.

The future remains bright for Sweet, who has endured heartbreaking tribulations throughout his life and career, including the 2009 passing of his wife of more than 22 years, Kyle. In 2010, Sweet remarried to Lisa Champagne-Sweet, a woman he describes as "a Godsend and the one who fits perfectly by my side."

Sweet continues to record and tour with STRYPER, as well as touring and recording as a solo artist, all the while making frequent trips to Nashville where he is writing with some of the biggest music writers in the business.

"After 30 years in this business, I feel honored and blessed to be able to continue doing what it is I love, making music," said Sweet.

"I'm extremely thankful to have the greatest fans in the world.

"God has blessed me with this talent and I plan to continue on this path as long as I can draw breath."

* How Michael Sweet formed the first Christian rock band to hit #1 on MTV, paving the way for an entire genre of music.
* First-hand stories of the Sunset Strip, with never-before-told stories that include friends and musical peers such as POISON, MÖTLEY CRÜE, RATT, WHITESNAKE, METALLICA and more.
* How Jimmy Swaggart and Jim and Tammy Faye Bakker played a role in Michael's life.
* The temptations and ultimate low-points of a notable Christian rock star.
* Never-before-revealed stories of life behind the scenes in STRYPER.
* Why so many people have declared Michael Sweet a significant influence on their lives; from Larry The Cable Guy to professional wrestler Chris Jericho to Haitian musician and politician Wyclef Jean and more.
* Losing his wife to cancer and re-marrying shortly thereafter.
* An honest look at Sweet's often tumultuous family relationships.
* The unlikely relationship between Sweet and national radio personality Don Imus.
* What led to the decline and fall of STRYPER in 1992, and subsequent reunion and rebirth in 2001.

"I'm Not Your Suicide" track listing:

01. Taking On The World Tonight (featuring Tony Harnell)
02. All That's Left (For Me To Prove)
03. The Cause
04. This Time (featuring Kevin Max)
05. I'm Not Your Suicide (co-written with Blair Daly)
06. Coming Home
07. Miles Away
08. Strong
09. How To Live (featuring Robert Sweet and Timothy Gaines of Stryper)
10. Heart Of Gold
11. Anybody Else (featuring Chris Jericho and Doug Aldrich)
12. Unsuspecting
13. Heart Of Gold (featuring Electra Mustaine) (bonus Track) 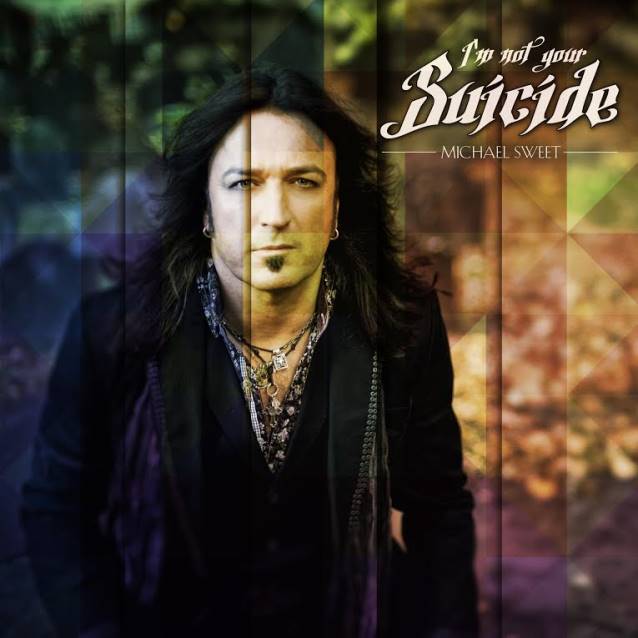