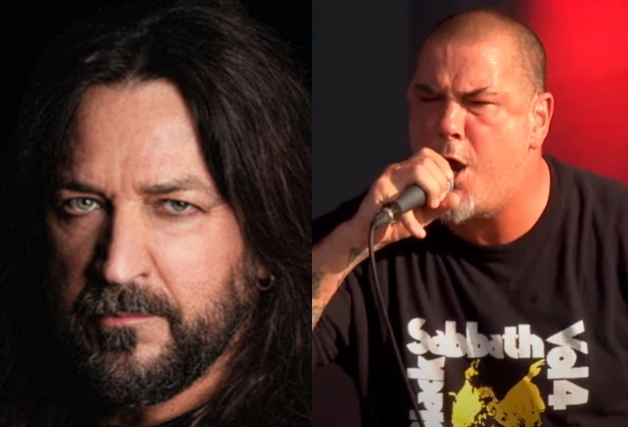 Sweet discussed his views on the PANTERA comeback in a new interview with "BODS Mayhem Hour". Asked what he thinks about Anselmo and Brown touring again under the PANTERA name, Michael said (as transcribed by BLABBERMOUTH.NET): "Well, that's the question of the day, 'cause that's in the news right now. You go back a few months, or over a year ago, VAN HALEN was the question of the day regarding that: how do you tour as VAN HALEN without Eddie Van Halen?

"Here's the thing: it's real easy for all of us to give our opinions on that, and a lot of times those opinions aren't positive; they can be on the negative side," he continued. "But that being said, you've gotta take into account the guys that are still alive that were just as big a part of those bands. In terms of fame and recognition, maybe not, but effort, hard work, time involved in that band? Absolutely. So that, to me, gives them the right to do that. But don't call it… I don't know about calling… [In the case of VAN HALEN], if you go out with [Joe] Satriani and someone else on bass — Jason [Newsted] they talked about on bass, and then it was Michael [Anthony], and who knows who it may be if they do that — don't call it VAN HALEN. But then again, Alex Van Halen is the drummer and he holds the name. So that's a fine line.

"PANTERA? I do understand some people getting up in arms over it being called PANTERA when the Abbott brothers aren't involved," Sweet added. "I mean, they pretty much were PANTERA just as Eddie Van Halen was VAN HALEN, right? We can all agree on that. But again, who is Michael Sweet to say whether they should or shouldn't do that?

"This is our livelihood, this is what everyone does to pay the bills and what everyone does just out of the sheer love in the heart for doing it. We love doing what we do, and what else are we gonna do? So these guys, they've gotta continue on. That's — I don't wanna say 'bread and butter'; that's so cliché, but it is their bread and butter. And I think they should do what they need to do but as long as they are respectful in the process. When they start disrespecting and doing it in a disrespectful way, that's when I'll step up. I'll be the first one to step up and say, 'Wait a minute here. That's not right.' You know what I mean?"

Last month, Sweet hinted that STRYPER will share the stage with the reactivated PANTERA at this year's edition of Mexico's Hell & Heaven Metal Fest. At the time, he took to his Instagram to share a new PANTERA photo composite from BLABBERMOUTH.NET, and he included the following message: "What's my take on the new @panteraofficial lineup? Well, first of all it doesn't matter what I think. That being said, I think it's great! As long as they have the Abbott Family's blessings and they're respectful while honoring Dime & Vinnie, I applaud the decision to move forward.

"I look at it more so as a 'Celebration', celebrating the lives and music of The Abbott Brothers. Also, who better to perform Darrell's parts but the one and only @zakkwyldebls – THE perfect guy for the job. Then add @charbenante to cover for Vinnie? Again, perfect! And let's not forget all the work that Phil & Rex put into PANTERA early on as well.

"In closing, I'll get to witness this lineup up close and personal in Mexico".

Also last month, Benante told SiriusXM's "Trunk Nation With Eddie Trunk" about how he plans to approach the PANTERA gig: "I can't go do this as the drummer from ANTHRAX because it would be a different sound completely. So the way I'm gonna do that is if you close your eyes, it's gonna sound like it's Vinnie, basically. And that's how it's gonna be. The sound is gonna sound exactly like him."