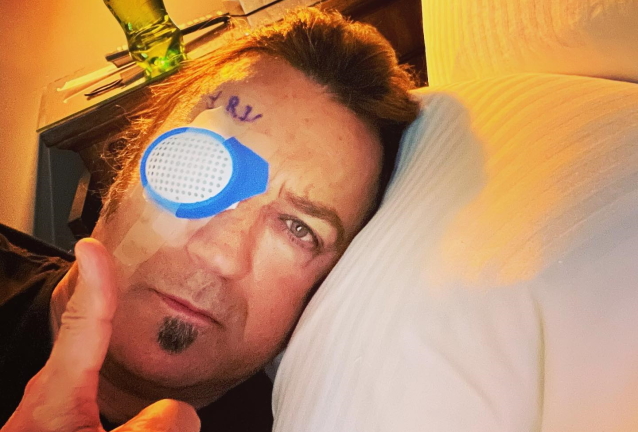 STRYPER frontman Michael Sweet recently underwent his third eye surgery after being diagnosed with a detached retina last November. In a new interview with Myglobalmind, he stated about the experience (as transcribed by BLABBERMOUTH.NET): "When you think of eye surgery, it certainly doesn't seem like anything major. And it certainly won't get the attention of other surgeries — open heart, bypass surgery, brain surgery, all this kind of stuff, which is all terrible. But I'm gonna tell you right now that the eye surgeries that I've been through — this is my third one — gosh, either I'm a big baby or they were terrible. I have really sensitive eyes anyway, and that would be the last thing I would ever wanna have to deal with in my life, is eye issues, regarding surgery.

"What I had to have done this third time — this was my third surgery — was they put oil in my eye for six months to hold my retina in place," he explained. "And when they put that oil in six months ago, in January, they had to remove my lens 'cause I developed a cataract. So they took my lens out. So I was dealing with that for six months, and I got used to that. Then I had to have the oil removed because if you leave it in too long, you develop glaucoma which can lead to blindness, blah blah blah. So it's very complicated. And they removed the oil, flushed the oil out; that was one incision. And then they put a new lens in; that was another incision in my iris. And my eye is pretty beat up right now."

Michael's medical emergency came months after STRYPER guitarist Oz Fox underwent the first of his brain surgeries to treat one of the tumors that were found in his head four years ago. As a result, Oz sat out some of the band's 2021 tour dates and was temporarily replaced by Howie Simon (JEFF SCOTT SOTO, GRAHAM BONNET).

Fox's tumors — one by his ear and the other in the back of his brain — were discovered when he suffered his first seizure in August 2018 while performing with SIN CITY SINNERS at Harrah's in Las Vegas.

In October 2020, Fox was briefly hospitalized after suffering another massive seizure.

Within weeks of Fox's original August 2018 seizure, STRYPER toured Australia and Japan as a three-piece, and later recruited Simon to fill in while Fox was unable to go on the road.

STRYPER's new studio album is due later this year via Frontiers Music Srl. The follow-up to 2020's "Even The Devil Believes" was produced by Sweet and was once again recorded at SpiritHouse Recording Studios in Northampton, Massachusetts.

Michael is joined in STRYPER by his brother Robert Sweet (drums),Fox (guitar) and Perry Richardson (bass).

Surgery was originally supposed to be at 10:30 so we got picked up at 6:30 to beat Boston traffic. Surgery...