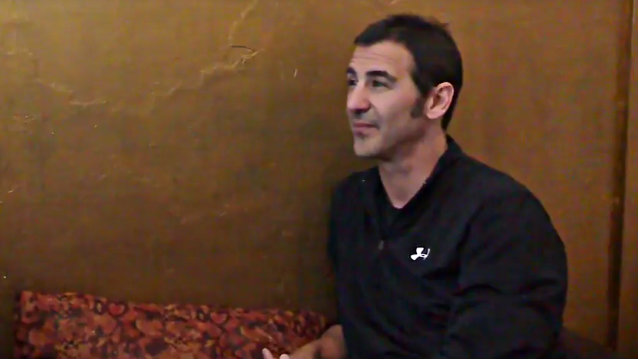 SULLY ERNA On Next GODSMACK Album: 'It's Not Quite As Angry As It Used To Be'

Nati P Taviel de Andrade of Spain's Goetia Media conducted an interview with GODSMACK frontman Sully Erna prior to his September 21 solo show at SO36 in Berlin, Germany. You can watch the entire interview below. A few excerpts follow (transcribed by BLABBERMOUTH.NET).

On why his family is such a source of inspiration:

Sully: "My dad started me in music. He's the reason why I began playing when I was very young, three years old. He is a trumpet player and he had bands that would rehearse in the basement and I grew up watching him play and that's how I got involved with music. All of these years now have passed and I've done all the stuff with music and when I wrote the song 'Turn It Up', it was bluesy and jazzy and I knew I was going to use horns, but I wasn't thinking of my father. I was just thinking I had to hire some horn players. Then I thought of my dad, I'm, like, 'Oh my God. This is the perfect opportunity to play a song with my dad. We've never done that yet.' So I brought him in and he was really excited. He learned all the music and we worked on it. He played on the album and then he did a show with us. It was a great memory for both of us."

On whether he identifies better with the music he wrote in GODSMACK or as a solo artist:

Sully: "Well, both. GODSMACK is definitely personal as well. It's a little bit more aggressive music, but the words are still very attached to my life and the things that I went through. But it's also a reflection of my past and who I used to be. And so even with the new GODSMACK that we're writing, it's not quite as angry as it used to be because I'm not the same young person I was when I was growing up. A lot of things have changed. The solo stuff is a little bit more intimate. It's a little bit more closer to me and who I am as a person now."

On his personal development;

Sully: "I'm a lot smarter. I'm a lot more calm. I have a lot more patience. I have a lot more love for people in general. When I was younger, I was living too fast. It was too crazy and if you mix that with drinking and all the other stuff that goes along with that, it creates a lot of pain. A lot of those things I lived through, I also now realize I have to take responsibility for because of my own actions. There's a big difference now. I'm a father."

On his future plans for his solo career:

Sully: "I'm not sure. I'm out here right now just making my way around Europe and testing the market just to see how it's doing. This is the first time playing through Europe, so I'm not expecting it to be big, giant shows. For some reason, Bulgaria really came alive quickly. We played there last year as a three-piece and we sold eight thousand tickets. So that was a surprise. That's not happening anywhere else right now that I know of. [Laughs] It's nice to come out and see how we're doing so we know where we have to do more work. That really is the goal for this tour is not to come here and expect to play to giant crowds, but to see which markets are weak and what markets are strong, then we'll come up with a different strategy on how to try to build a fanbase in those markets."

Sully recently confirmed that GODSMACK will enter the studio this winter to begin recording its follow-up to 2014's "1000hp" album. The group's seventh studio disc will be produced by Erik Ron (PANIC! AT THE DISCO, SAOSIN) and will arrive in 2018 to coincide with the twentieth anniversary of GODSMACK's debut album.