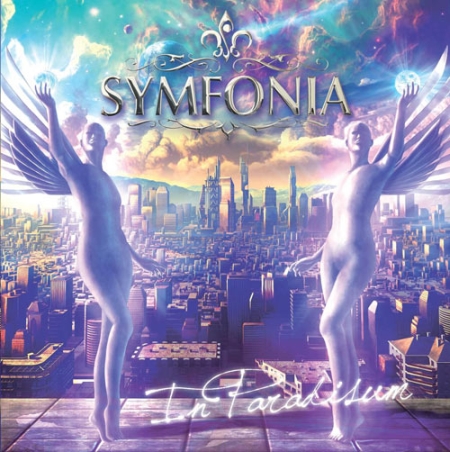 A two-minute sample of "Fields Of Avalon", a brand new song from SYMFONIA — the new melodic metal project featuring former members of HELLOWEEN, STRATOVARIUS, ANGRA and SONATA ARCTICA — is available for streaming at Symfonia.fi (in the audio player at the bottom of the page). The track comes off the band's debut album, "In Paradisum", which is scheduled for release in Europe on April 1 via Edel Germany GmbH (April 19 in North America through Armoury Records).

SYMFONIA made its live debut on February 18 at the Finnish Metal Expo (part of the Helsinki Metal Meeting) in Helsinki, Finland.

Fan-filmed video footage of the concert can be viewed below.

Drummer Uli Kusch was unable to join his SYMFONIA bandmates at the Finnish Metal Expo show because is suffering from nerve damage and was advised by his doctors not to play drums for the foreseeable future. His temporary replacement was the renowned German drummer Alex Landenburg, who has previously played with AT VANCE, ANNIHILATOR, MEKONG DELTA and STRATOVARIUS).

A press release reads as follows: "They are all legends among the melodic metal community. By sheer coincidence, they all found themselves living on the same continent, in Scandinavia. They decided to join forces and express their talents in the form of a new melodic metal project: SYMFONIA.

"Honoring the heritage of their previous bands STRATOVARIUS, HELLOWEEN, ANGRA and SONATA ARCTICA, SYMFONIA continues their superb melodic metal tradition with an incredible musicianship that is a match made in heaven. This is a force that no serious melodic metal fan will be able to ignore."