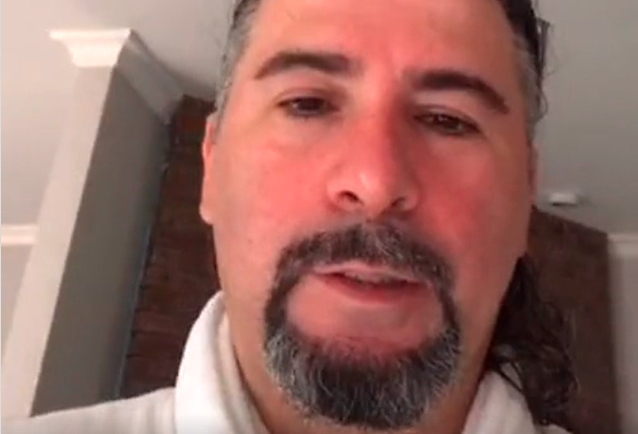 SYSTEM OF A DOWN's JOHN DOLMAYAN: It 'Shouldn't Be A Shock To Anybody' That SERJ TANKIAN And I Have Different Political Views

SYSTEM OF A DOWN drummer John Dolmayan says that fans shouldn't be surprised by the fact that his political views are drastically different from those of the band's lead singer, Serj Tankian.

Several days ago, Dolmayan took to his Instagram to praise Donald Trump, calling him "the most attacked president in history yet the greatest friend to minorities." He also shared a meme featuring Trump's claim that his administration has done more for the African American community "than any president since Abraham Lincoln." Meanwhile, Tankian called this week for Trump to resign and described him as "completely useless" over his handling of the coronavirus outbreak.

After news of Dolmayan's and Tankian's comments made the rounds, the drummer once again took to his Instagram on Friday (June 5) to clarify his position and to reassure fans that his personal relationship with Serj is as solid as ever.

In a 14-minute video message, Dolmayan said: "We have differing opinions in SYSTEM OF A DOWN. That shouldn't be a shock to anybody, because you have four individuals — we're not always like-minded and don't always agree on everything. But you'd be surprised at how civil our conversations are, especially between me and Serj, who seem to have the most diverging opinions on things. I have a lot of respect for Serj and his opinions, although I don't agree with them very often these days. And that's okay. We expand each other's horizons — I like to think that he learns from me and I learn from him."

Acknowledging that a lot of the SYSTEM fans "are wondering why I have certain views," Dolmayan went on to defend his personal beliefs and his right to voice them publicly.

"Some of you have been sending me messages — in fact, quite a few — saying that you are thankful that I get out there and I put out a viewpoint that's a little bit different," he said. "Others of you have been upset, disappointed, and have voiced their disappointment in different ways — some have been positive and some negative.

"I take everything really lightly and I really don't get too bothered by it," he continued. "But I have had some dialogue with some people and I've enjoyed that — people that think differently, have a different perspective, and I really like getting that perspective.

"Look, guys, a lot of you are very young, and as you gain experience in life, you will have different ways of looking at things and different perspectives, and it won't mean as much to you to fit into certain boxes that people set for you. And I guess in a lot of ways that's what's happened to me, although I've always tended to think more conservatively."

Dolmayan also alluded to the fact that Americans have become increasingly polarized along political party lines, primarily due to political candidates relying on negative campaigning and partisan news sources serving up vitriolic commentary.

"People shouldn't sit there and allow their moral superiority in their heads — because you really aren't morally superior to anyone, although you may think you are; you really aren't," he said. "Especially if you don't know the other person — you don't know every aspect of their life, their motivations for things. And also, generally speaking, you're basing things based on your experiences without taking into consideration that your experiences are limited to you and they don't represent everybody.

"I see a lot of very famous people saying a lot of things, and I'm not sure if it's coming from the heart," he continued. "But I will always fight for what I think is right. Even if I'm later found out to be wrong, I will judge it then, and I am not afraid to change my position on things. But there's just a lot of hypocrisy happening.

"Don't believe everything the famous people tell you — they don't know anything for the most part. I don't know anything for the most part. I don't know why things happen and what reasons the government has for doing things. All I know is they have to think a lot further down the road than we do, generally speaking — they have to think, like, 50 years in the future and how this country's gonna survive and what our place is gonna be in the world. And they're people and they're gonna mistakes. It's just that usually we're the ones — private citizens like us — that pay for it. And I'm deathly afraid that the middle class is getting hit the hardest here, as they always do. And the middle class is very important here in the United States, as it is in most countries. Most countries try their hardest to develop their middle class, because something like 90 percent of the gross national product is consumed and created by the middle class."

Earlier this week, Tankian gave an interview to the "Side Jams With Bryan Reesman" podcast in which he said that he is surprised to see some SYSTEM fans taking issue with the fact that he is very vocal about his political views.

"When I get people on my socials that are, 'I love your music, but I don't wanna hear your political ideas,' that's fair enough — if they're nice enough, it's fair enough, but sometimes they're really mean," he said. "But what I don't understand, and a lot of other people that follow the music say the same thing — they're, like, 'Have you not listened to the fucking words in 20 years? He's been saying all this stuff through his music all this time. What are you, just dancing to it because it's groovy? You're not really getting the message?' And that's okay, too, obviously — people just like hard music; they wanna listen to hard music. They never even thought that [the SYSTEM OF A DOWN song] 'B.Y.O.B.' is anti-fucking-imperialist — maybe. I don't know — I don't know how you can, but I guess maybe. So it's very interesting to me, seeing that."

He said: "[Trump is] obsessed about himself, and the economy is his barometer of his presidency, in his mind, so he doesn't want the economy to fail, and, obviously, it's going to fail. All the economy in the world is failing because of this involuntary cause," referring to the coronavirus pandemic.

"Everything that he says in his press conferences reverts back to him and how well his government is doing, or making fun of the press for… not making fun, but basically beating down on them, that they wanna replace him and this is all about his re-election," Serj continued. "It's all about him."

Why am I posting this in my robe