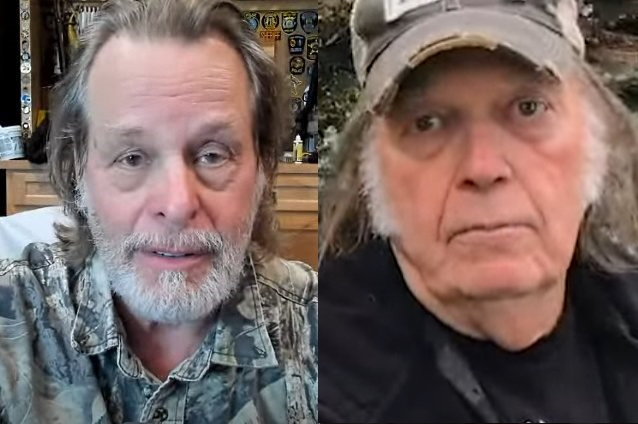 TED NUGENT Blasts NEIL YOUNG: 'He's Out Of His Mind'

Ted Nugent has blasted Neil Young for wanting to "censor people" after the legendary singer demanded that his catalog be removed from Spotify in response to "fake information about vaccines" being "spread" on the platform via Joe Rogan's podcast, "The Joe Rogan Experience". Young delivered an ultimatum, adding, "They can have Rogan or Young. Not both." Spotify announced a few days later that it would pull Young's music catalog from its platform.

In a new interview with Kristi Leigh, a former reporter for the Sinclair Broadcast Group-owned KMPH-TV, Nugent was asked to weigh in on Young's position. He said (as transcribed by BLABBERMOUTH.NET): "Number one, he's a Canadian so he started at the back of the shitkicker line. And I love my Canadian friends. Look what they're doing right now, the truckers in Canada," he added, referencing what started as a truckers' protest against COVID-19 mandates but has since snowballed into a blockade in the Canadian capital and gridlock at a U.S.-Canada border crossing. "That's the human instinct. That's the defiant middle-finger celebration of autonomy and good over evil. So Canadians are great people. But some of them, like Americans and everybody else in the world got so stoned that their brains got burnt. Have Ozzy [Osbourne] form a sentence for ya. And I love the man. But comfortably numb is uncomfortably dumb. And Neil Young is the poster child for that. I mean, [he sings] 'Rockin' In The Free World' but he wants to censor people? Hey, Neil, choose one. You can't do both, you dirtbag. He's just a sad… And I hope he's healthy and happy, but I think his brain is so burnt, he doesn't know what happy is anymore. If he is 'rockin' in the free world,' then he wants to censor somebody who's bringing information from world-renowned virologists and epidemiologists and calling that misinformation, but he's gonna quote Joe Biden as the decree of… Are you kidding me?

"When you do that much mind-destroying chemicals upon yourself, your brain is burnt and you struggle to find logic, truth and common sense," Ted added. "Neil Young has no common sense. He's out of his mind. And all you can do is pray for him and ignore his stupidity. That's what I do."

Neil's wife and acclaimed actress Daryl Hannah took to Twitter to express criticism for Rogan's podcast and the eventual choice Spotify has made regarding Neil's ultimatum.

Daryl wrote: "sad to see some confuse censorship & free speech with the choice a private company has in deciding what they profit from a podcaster is free to say whatever they want Just as Neil is free to NOT have his music on a platform that makes $$$ of disinformation that harms folks".

In response, Rogan promised to "do my best, in the future, to balance things out," while Spotify said it would add content advisories to podcast episodes with information about COVID-19. In an almost 10-minute-long Instagram video posted on Monday, Rogan said he would "try harder to get people with differing opinions on" on his show, which averages 11 million listeners per episode.

Spotify's company's chief executive Daniel Ek has defended Rogan in the past, including after an episode that featured the conspiracy theorist Alex Jones in 2020.