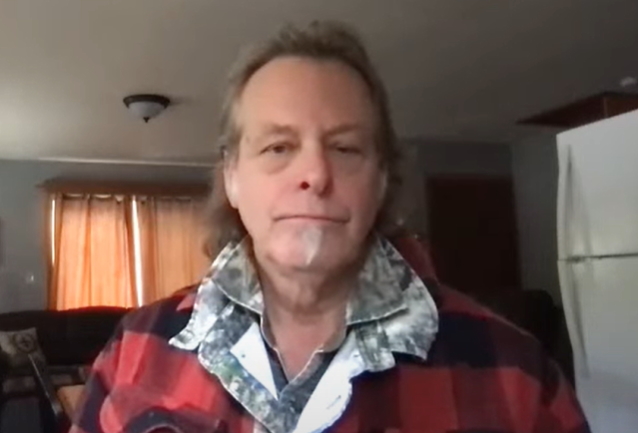 "Why would there be a royal family still living in those castles while those people are still trying to find a dentist on the street?" he continued. "It's a pretty sad statement on how brainwashed, how easily led, how easily fooled and diverted attention can allow someone to worship another human being.

"So I will leave it at that," Nugent added. "I've spent a lot of time in England. They've got great rock and rollers over there; they've got wonderful people over there; and I don't mean to offend people by mouthing sheep language. But my goodness, we are all independent beings created in the image and likeness of God. We are capable of unbelievable things, if we just call upon the gifts and the talents that God has given us. And it doesn't mean jack squat that someone is born into royalty. In fact, I think that is an offense to the rest of the population.

During his White House tenure, Trump had made his affection for authoritarians — from the Philippines' Duterte to Turkey's Erdoğan to China's Xi — well known. In a Fox News interview in 2018, Trump praised North Korean dictator Kim Jong Un as "strong head" of his country. "He speaks and his people sit up at attention. I want my people to do the same." Trump also repeatedly lavished praise on Russia's Vladimir Putin, saying: "You have to give [Putin] credit that what he's doing for that country in terms of their world prestige is very strong" and praising the Russian dictator's "very strong control over [his] country."

In tapes from Bob Woodward's book "Rage", Trump said he gets along "very well" with Turkish strongman Recep Tayyip Erdoğan, and added of his relationships with dictators, "the tougher and meaner they are, the better I get along with them," which he insisted is "not a bad thing." "The easy ones," Trump said, referring to America's allies, "I maybe don't like as much or don't get along with as much."

Earlier in the month, Nugent compared Joe Biden to Adolf Hitler following a speech the U.S. president made.

Nugent has repeatedly said that the 2020 presidential election was a fraud, insisting that "hundreds of thousands of dead people" voted and claiming that machines were "rigged" to give a Trump vote to Biden. Trump lost the election by more than seven million in the popular vote and by 306-232 in the Electoral College.