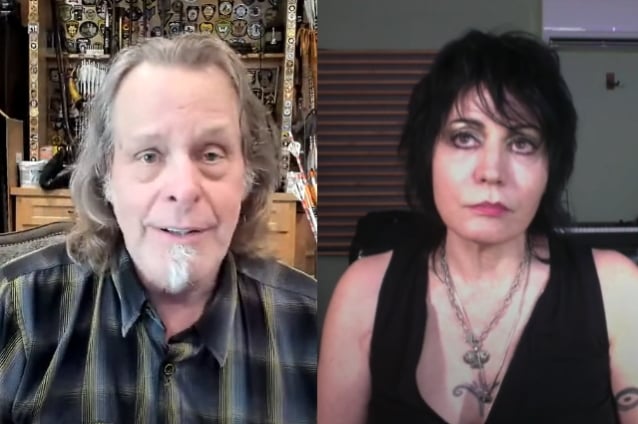 Ted Nugent has blasted Joan Jett after her pointed retort in an interview in which she was asked to respond to the outspoken conservative rocker's assessment of her musical skills, when he claimed she didn't belong on a list of the best rock guitarists.

In a video he posted last December, Nugent brought up a list originally published by Rolling Stone's David Fricke in December 2010 where Jett came in at No. 87 while Ted was not included at all. "You have to have shit for brains and you have to be a soulless, soulless prick to [include] Joan Jett," Nugent said. The 73-year-old musician added: "How do you list the top 100 guitar players and not list Derek St. Holmes? How do you do that? You do that by lying. The same way you get Grandmaster Flash in the Rock And Roll Hall Of Fame. You do that by lying. You have to be a liar."

When asked in a recent interview with NME to comment on Nugent's claim that she shouldn't be on the list, Jett said: "Neither should he.

"Is that his implication," Jett asked, "that he should be on the list instead of me? Well, that's just typical — it's what I've dealt with my whole life, being written off. Ted Nugent has to live with being Ted Nugent. He has to be in that body, so that's punishment enough."

After a brief pause, she added: "He's not a tough guy. He plays tough guy, but this is the guy who shit his pants — literally — so he didn't have to go in the Army." She then summoned her longtime manager Kenny Laguna to "help," imploring Laguna to relay the full tale of Nugent's supposed Vietnam War draft-dodging tactic (which the alleged pant-shitter himself shared with High Times magazine in 1977 and later retracted).

"So this," Jett concluded, "is the tough guy who's running around America, stirring things up against each other."

Earlier today, Nugent responded to Jett's comments, calling her "stupid" and once again denying that he dodged the draft. Speaking during a YouTube livestream, he said (as transcribed by BLABBERMOUTH.NET): "All I expressed in an interview on WRIF was how I love Joan and her killer rocking band. She's got a great rocking band. Great songs. The best garage band maybe ever, except for maybe GREEN DAY. [I] love Joan — all I said is how I love her. But I used her as an example — along with Joni Mitchell. [I] love Joni Mitchell… People love that music. People love Joan Jett and Joni Mitchell. I love them. I expressed I love them. But she can't be in the top 100 guitar player list — either of them. They play nice strumming guitars; they play nice guitars. I like it. They're good. But top 100 before Rik Emmett of TRIUMPH? That's a lie.

"Joan Jett, I love you," he continued. "Don't get all upset. She calls me a racist and [says] I'm jealous. I didn't even mention that I should be on the list. Let's pretend that I don't play guitar. Let's pretend I'm just a keyboard player, or maybe a gay conga player. I never mentioned my name [as being excluded from] the top 100 guitar list — though someone might. But Joan, would you just relax?

"Joan Jett and Joni Mitchell cannot be on the top 100 guitar player list before Derek St. Holmes or Rickey Medlocke or Jimmy McCarty or Mark Farner. Certainly. Or Jared Nichols. Or Chris Duarte. This isn't an opinion. There's no room for an opinion here. I'm mentioning guitar players that are world-class monster virtuosos of undeniable musical authority and guitar prowess."

Nugent went on to say: "How about — Paul Reed Smith is a better guitar player than Joni Mitchell or Joan. I don't mean to hurt your feelings, guys, but your drummer, Joan, is a better drummer than I am. I shouldn't be on the top 100 drummers list. All my drummers should be — all my drummers are amazing. [Laughs]

"So, Joan, just relax, honey. I love you," Nugent added. "You make great music. But you're not a top 100 guitar player. You must know that. Joni Mitchell, you must know that — I love you, Joni. But you're in the top 100, maybe the top 20 folk singers, certainly. And Joan Jett would be in the… certainly Rock And Roll Hall Of Fame and maybe the top 20 garage bands. THE AMBOY DUKES were a garage band, so that's not a negative; that's a positive. NIRVANA would be maybe number one garage band. BROWNSVILLE STATION number two. Joan Jett maybe number three. GREEN DAY maybe three and a half.

"See, I'm not knocking these people; I'm just telling you the truth. [Laughs] I didn't know they were that stupid."

Ted also once again shot down the allegation that he dodged the draft, saying: "No, I didn't. I didn't get drafted, but I didn't dodge the draft. [In the High Times interview] I was telling a story about a drummer friend who shit his pants and I don't know what else he did. It's a funny story. Plus I gave the story to a writer — I'm being awfully generous with that term — for High Times magazine. You're gonna have a serious interview with High Times magazine?

"See, they cling to these lies and hate 'cause they've got nothing else. Which is why they are absolutely helpless to debate me."