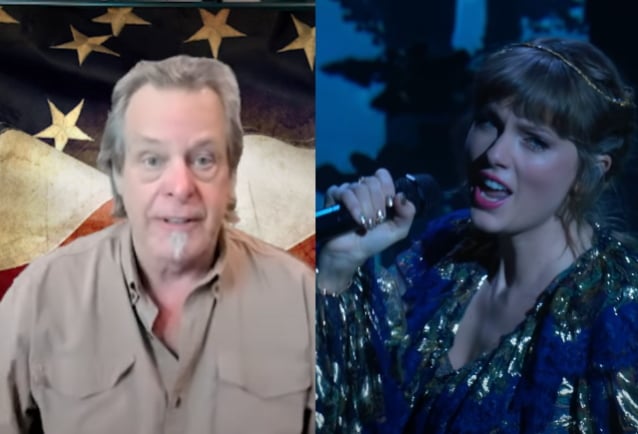 TED NUGENT Blasts TAYLOR SWIFT For Her 'Hypocrisy', Admits He, Too, Flies Private

Ted Nugent has blasted pop superstar Taylor Swift for her "hypocrisy" after she topped a list of celebrities whose private jets have produced the highest amount of carbon dioxide so far this year.

U.K.-based sustainability marketing firm Yard published a report last week revealing that Taylor used her private jet more than any other celebrity in 2022, taking 170 flights so far this year, totaling almost 16 days in the air. The aircraft's total flight emissions were 8,293.54 tons of carbon, which is 1,184.8 times more than the average person's total annual emissions.

A spokesperson for Swift quickly shot down the report, saying in a statement: "Taylor's jet is loaned out regularly to other individuals. To attribute most or all of these trips to her is blatantly incorrect."

Nugent addressed the report during the latest edition of "The Nightly Nuge", a news-style clip in which he offers his take on the news of our world. He said in part: "You can identify the insanity of the liberals who support the Green New Deal but pollute more in a single private jet flight than the average thousand American households…

"I've got a hell of a carbon footprint because I fly private every night too," Ted admitted. "But the thing is I'm flying over Texas every night where we have more energy reserves than all of Saudi Arabia and Africa combined.

For the Yard study, the company used data from the Twitter account @CelebJets, which tracks private jet travels from celebrities.

In a 2020 interview with Variety, Swift named climate change as one of the issues that concerned her.

Green New Deal proposals call for public policy to address climate change along with achieving other social aims like job creation and reducing economic inequality. The name refers back to the New Deal, a set of social and economic reforms and public works projects undertaken by President Franklin D. Roosevelt in response to the Great Depression.